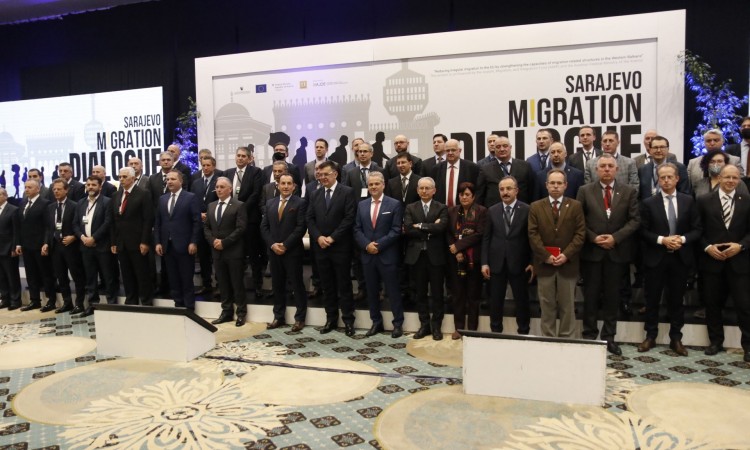 SARAJEVO, November 19 (FENA) – A joint response with the cooperation of all is needed in order to manage illegal migration, it was pointed out today at the opening of the regional conference “Sarajevo Migration Dialogue”.

This conference at the highest level aims to strengthen cooperation and partnership in the region as well as the exchange of information and experiences, which are crucial for effective migration management.

With the participation of ministers from the countries of the region, representatives of the European Union and international organizations, concrete proposals for resolving issues in the field of migration will be discussed.

Discussions will be conducted through three panels: migration management, border control and management, and future trends and challenges in migration.

“Bosnia and Herzegovina is one of the countries that has been particularly affected by the migrant crisis in the past three and a half years, and as a country bordering a member of the European Union, it has continuously been exposed to an increased number of illegal border crossings,” he underlined.

From the beginning of 2018 to November 2021, more than 84,000 illegal migrants were detected on the territory of BiH, of which 94 percent expressed their intention to apply for asylum, and only 3.4 percent actually applied for asylum in BiH.

“Migrants who enter illegally, perceive Bosnia and Herzegovina, as well as other countries on the Western Balkan route, as a transit country to the desired destination in the European Union,” said Cikotić.

He warned that the main challenges facing BiH in the migration management process relate to the lack of political consensus and effective coordination in the field of migration management and the chronic lack of financial resources in all institutions and agencies responsible for migration and asylum.

There are also a number of operational challenges such as: severe lack of human and logistical capacity, protection of the state border, identification, abuse of the asylum system, implementation of an effective return, the conclusion of readmission agreements and the like.

In the past period, all available measures and activities have been taken in order for BiH to respond to the current migration situation as efficiently and humanely as possible, primarily improving the control of migrants in BiH, improving eastern border control, and taking a number of actions to cut smuggling rings.

“The fact is that the problem of a large number of migrants entering illegally cannot be solved by one country or region alone, and the needs for strong regional and European cooperation are very pronounced, as well as the need for a regional approach to joint action on migration movements,” Cikotić pointed out.

In a video address, the EU Enlargement and Neighborhood Commissioner Oliver Varhelyi warned of the serious situation BiH faces in the area of ​​migration, but with EU support, the situation has partially improved.

“BiH at all levels of government should, as a country whose aspirations for European integration, work on a sustainable and lasting solution. Migrations are a common challenge and we are working with all partners to respond to that, but we will continue with our support,” Varhelyi underlined.

He reiterated that the doors of the EU are not open to illegal migration and called for work on the functional issue of asylum, but added that they are committed to working on assistance in terms of returning migrants to their countries of origin.

The conference is organized by the Ministry of Security of Bosnia and Herzegovina with the support of Hilfswerk International. The conference is part of the project “Reducing Irregular Migration in the EU by Strengthening the Capacities of Migration-Related Structures in the Western Balkans”.

This project is co-financed by the Asylum, Migration and Integration Fund (AMIF) and the Federal Ministry of the Interior of the Republic of Austria.