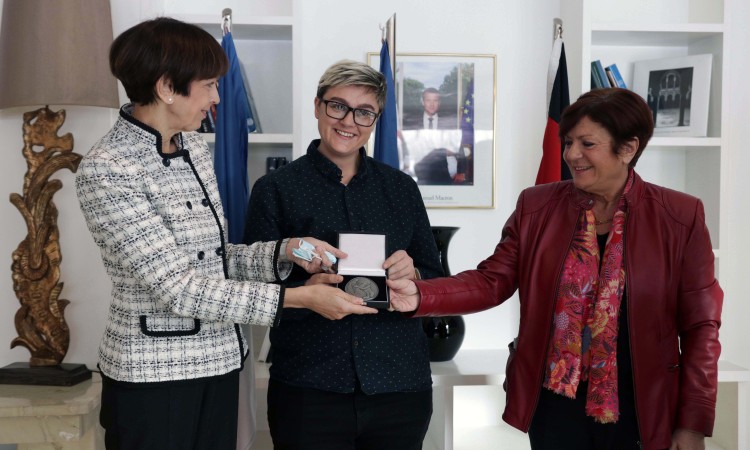 SARAJEVO, December 13 (FENA) – Due to her exceptional contribution to the defense of human rights in Bosnia and Herzegovina and selfless commitment to equality, Ajna Jusić, president of the Association “Forgotten Children of War”, was awarded the Franco-German Human Rights Award today.

On that occasion, a reception was held at the residence of the Embassy of the French Republic, and the award was presented by the Ambassadors of France and the Federal Republic of Germany Christine Toudic and Margret Webber, respectively, thanking her for defending and promoting human rights at a time when they are increasingly threatened around the world.

French Ambassador Christine Toudic stressed that this year’s award highlights the engagement of a young woman and highlights the work on human rights, adding that Jusić has shown social and human commitment from an early age and highlighted numerous activities to promote equality between women and men. as well as the fight against discrimination of all forms.

German Ambassador Margret Webber reminded that Jusić once said that her voice was her therapy and that she was happy to share her story with the world, thanking Jusić for allowing others to be part of her healing process.

“In a country where, 26 years after the end of the war, it looks more to the past than to the future and which currently points more to what separates than unites, it is not easy to say that children were born as a result of war rape. However, it is precisely these children, mothers, and their families who need to be given a place in the middle of society, and not on the social margins,” Webber underlined.

In their address, the ambassadors Jusić pointed out that she tirelessly advocates for children born as a result of rape to receive the status of civilian victims of war and persists in the fight against stigma.

Jusić expressed satisfaction with the recognition given to her today, emphasizing that it is especially important that her voice is heard in BiH and around the world because the problem of children born as a result of war rape is not only the problem of Bosnia and Herzegovina.