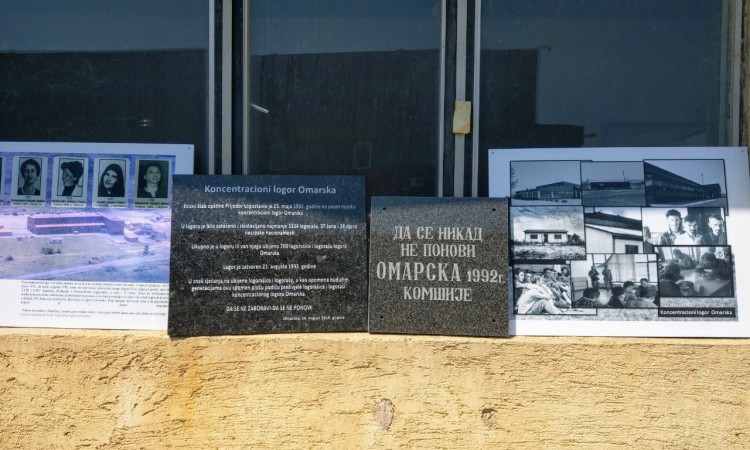 SARAJEVO, August 6 (FENA) – The 27th anniversary of the closure of the Omarska concentration camp near Prijedor was marked today with a commemoration and setting up a plaque to honor the detainees and victims.

President of the Regional Association of the Banja Luka Region War Camp Detainees Association Mirsad Duratović recalled that the Omarska camp was established on the order of the Crisis Staff of the Prijedor Municipality, on May 25, 1992, and its dissolution began 27 years ago on this day.

“Most detainees were transferred to Manjača concentration camp, one part was transferred to Trnopolje concentration camp, and by August 21 that year, a small group of detainees remained in the camp, which was to serve the local Serb authorities, that is, the Crisis Staff as “detainees for show” and to disguise the situation in the camp in case new TV crews appear,” Duratović told FENA.

“One group of Prijedor inhabitants, together with their friends from Belgrade, erected a memorial plaque which reads ‘Never Again – Omarska 1992′, and they signed it: ‘Your Neighbors’, explained Duratović.

Duratović also added that the commemoration was attended by a student from Belgrade, who addressed the event with appropriate and meaningful words.

Duratović says that this is truly important because it shows us a different face of Serbia, “that there are people who feel for and sympathize with the victims and understand everything that was happening in this region.”

A university professor from the USA, David Pettigrew, well-known to the BiH public, also addressed the gathering. Waqar Azmi of London, the president of the Remembering Srebrenica Foundation, who visited Omarska concentration camp for the first time, also addressed those present.

“He said that they will now take certain initiatives and steps to try through the UK authorities, the parliament, and the prime minister, and in conversation with the owner of the former Omarska camp, Mittal, to obtain final approvals for the erection of these memorial plaques,” Duratović said.

He added that the memorial plaques were erected today without the approval of local authorities and the approval of Mittal, as the present owner of the premises, as the company declared itself incompetent to issue the permit.

“We erected the plaques and now we are waiting for the call to inform who is responsible for the issuing of the permit and then we will apply for legalizing the erection of the plaques,”  says Duratović.

He recalled that between five and six thousand detainees had passed through the Omarska concentration camp between May 25 and August 21, according to their records and statements of surviving witnesses, of that number, some 700 Omarska detainees ended up being murdered.

He explained that not all of them were killed directly in the camp, but that groups of detainees were taken away to other places.

“The public is well informed about the mass grave Hrastova glavica, the Lisac pit and the shooting of prisoners and detainees at Koričanske stijene.

These were all former Omarska detainees who were captured, taken there and shot at these sites.

The Hague Tribunal said, citing one statement and the minutes of the president of the Crisis Staff of the Prijedor municipality, Milomir Stakić, that 3,334 detainees, including 37 women and 28 minors, went through the Omarska concentration camp.

However, this is just the number at that time of the census. A lot of people were brought to the camp that did not go through the registering procedure and many were taken out and were killed at the spot without ever being in any of the records of the Omarska concentration camp,” Duratović concluded.