Anniversary of the initialling of the Dayton Peace Agreement for BiH 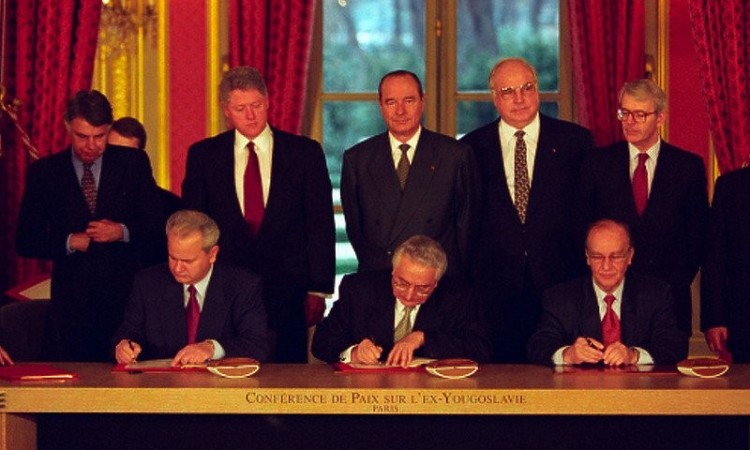 The legal act, of an amicable nature, which officially ended the nearly four-year war in Bosnia and Herzegovina (1992-1995), was initialed at the Wright-Pattersonn Air Force Base near Dayton, Ohio.

Peace talks took place from 1 to 21 November 1995 under the imperative to stop the war, and the Dayton Peace Agreement established Bosnia and Herzegovina as a state of three peoples and others, and two entities – FBiH and RS, with an agreement to arbitrate in connection with the Brčko district subsequently.

The agreement was initialled in the presence of the then US Secretary of State Warren Christopher. The lead US mediators were Richard Holbrooke and General Wesley Clark.

The Dayton Agreement was the culmination of the so-called the ‘Shuttle Diplomacy’, led by Richard Holbrooke with his team under the auspices of the United States.

The Agreement consists of 11 annexes, including Annex 4 – the Constitution of Bosnia and Herzegovina.

It confirmed the sovereignty, territorial integrity and independence of the state of Bosnia and Herzegovina, as well as the prescribed competencies of BiH and the entities, relations between institutions, as well as the manner of amending the Constitution of BiH.

“This is not just peace, but it is more just than the continuation of the war. In such a situation as it is now, in this world as it is, a better peace could not have been achieved,” said Alija Izetbegović, after the signing of the Dayton Peace Agreement on December 14, 1995, at the Elysee Palace in Paris.