BiH and USA to sign Memorandum on economic cooperation soon 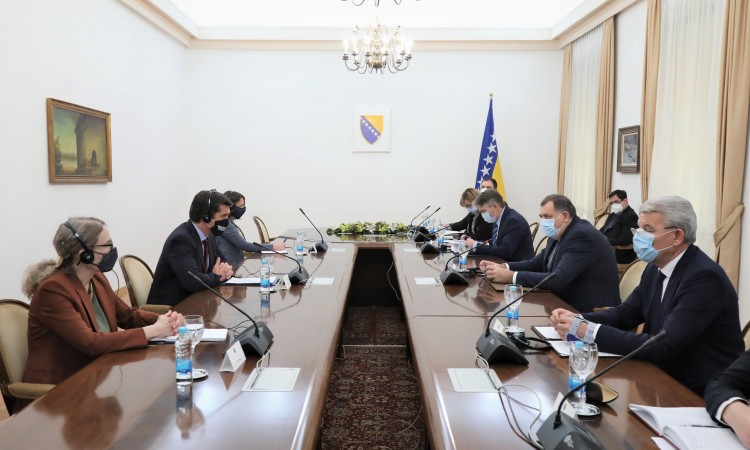 SARAJEVO, February 4 (FENA) – Chairman and members of the Presidency of Bosnia and Herzegovina Milorad Dodik, Šefik Džaferović and Željko Komšić talked today with US Ambassador to BiH Eric Nelson about bilateral cooperation, BiH’s activities on the European path, and current political and economic situation in BiH.

Speaking about European integration, the members of the Presidency of BiH expressed their readiness to fulfill 14 key priorities from the Opinion of the European Commission, for BiH to receive candidate status in the coming period.

The officials also discussed the modalities of the fight against the Covid-19 pandemic, and in that context, the members of the BiH Presidency informed the American ambassador about the efforts of BiH institutions in the fight against pandemic and procuring vaccines for the citizens of Bosnia and Herzegovina.

They also briefed Ambassador Nelson on the activities on solving the problem of illegal migration in BiH, emphasizing that on that path BiH needs help to systematically and adequately solve the current crisis.

Ambassador Nelson pointed out that the United States will continue to work as a partner to Bosnia and Herzegovina in implementing all necessary reforms that will enable a better life for the citizens of BiH.