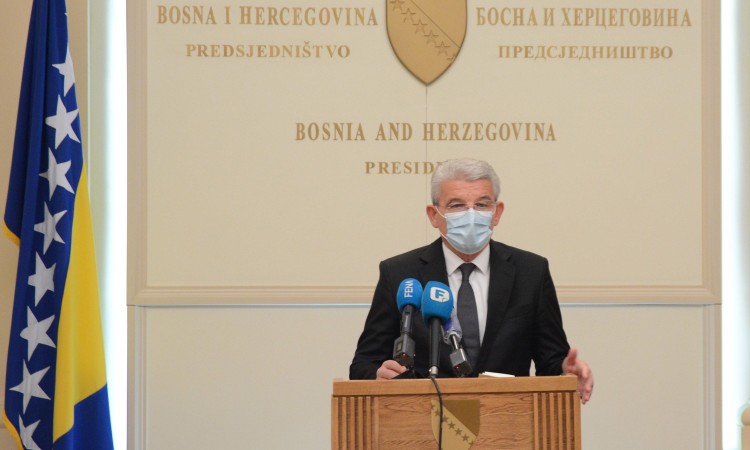 SARAJEVO, November 19 (FENA) – The Presidency of Bosnia and Herzegovina adopted, at the session today, a joint statement on the occasion of the 25th anniversary of the signing of the Dayton Peace Agreement, with an emphasis on strengthening and prosperity of BiH in peace.

After the session, the Chairman of the Presidency of BiH, Šefik Džaferović, said at the press conference that the joint statement has 11 items in which, among other things, it is said that a stable BiH should be built and the rights of all peoples in BiH should be respected equally but also expresses respect for all the innocent victims of the war.

The emphasis of the joint statement, said Džaferović, is on the development and strengthening of BiH in peace, stability, building mutual respect, understanding and respect for all peoples and citizens from all parts of BiH, with a special focus on future generations, young people.

“It should be the future of BiH, peacebuilding, stability, its integration process, mutual respect, understanding and respect, young people who need to have their chance, to stay in BiH, have a job, start their families and build their future in our homeland,” Džaferović emphasized.

The elements contained in the joint statement also indicated that marking of the 25th anniversary of the Dayton Peace Agreement is an event of the greatest importance for BiH, the entire region of the Western Balkans, but also Europe as a whole.

It was also pointed out that the Presidency of BiH expresses its full readiness and commitment to respect the provisions of the General Framework Agreement for Peace in BiH and the Constitution of BiH.

The Presidency of BiH expresses its gratitude to all international partners who have contributed to the establishment and preservation of peace, as well as to the reconstruction of BiH.

“Today is a unique opportunity to send a message and to point out the importance of strengthening trust, peace and mutual respect among all peoples and citizens in BiH, in all its parts, entities, Brčko District, cantons, cities and municipalities,” it is said in the joint statement.

The Presidency of BiH welcomes all the progress that has been made since the General Framework Agreement for Peace in BiH in the field of economy, education, democratization of society, rule of law, public administration.

It has been 25 years since the Dayton Peace Agreement and most BiH citizens, as stated, especially among the younger generations, want to have the opportunity to live, educate and work in a stable and prosperous society.

“We, the members of the Presidency of BiH, confirm our commitment to creating a society for all its peoples and citizens, and especially young people whom we want to enable to stay and create future in their homeland,” it was said in the statement.

The topic of the session was also the migrant crisis in BiH, and Džaferović said that members of the Presidency of BiH Milorad Dodik and Željko Komšić stated that the Ministry of Security of BiH had taken significant steps to protect BiH borders, and that readmission agreements led that today there are fewer migrants than there used to be in BiH.

“With the conclusion, the Presidency of BiH requested that all police agencies in BiH must apply the laws of this country in order to fully protect the personal and property security of BiH citizens and protect public order and peace,” BiH Presidency Chairman Šefik Džaferović emphasized.

The Presidency of BiH also believes that during the pandemic it is necessary to improve cooperation with all international partners in the resolute fight against this vicious virus.