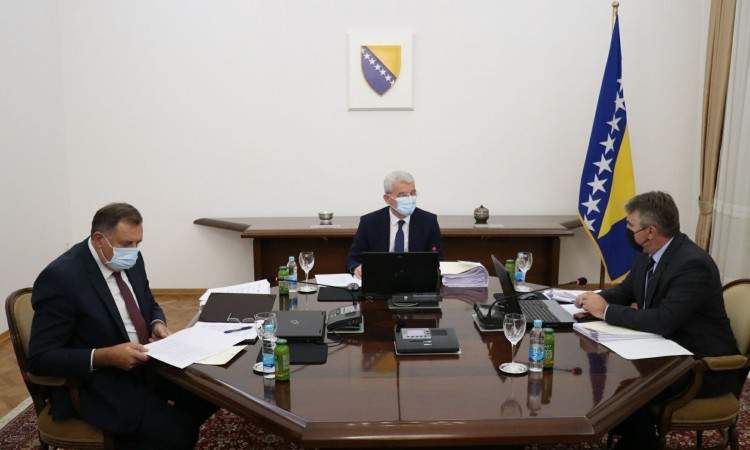 SARAJEVO, October 15 (FENA) – At its session today, the Presidency of Bosnia and Herzegovina adopted a Statement calling on all institutions in BiH to commit to the true fulfillment of all the 14 priorities necessary for BiH’s path to membership in the European Union.

The initiative for the adoption of that statement was launched after the stay of the members of the Presidency of BiH in Brussels, all with the goal of BiH accelerating its activities on reforms in order to obtain a candidate status for EU membership by the summer of 2021.

“This is a moment that BiH must not miss even when the candidate status is almost certain if we fulfill the obligations on our European path. Today, we called on all institutions in BiH to work diligently and continuously on fulfilling the priorities from the Opinion of the European Commission,” explained the Chairman of the Presidency of BiH, Šefik Džaferović, after the session.

The domestic institutions are urged to fulfill the conditions in close cooperation with European institutions, says Džaferović.

The European Union listed 14 priorities in May last year as a condition for the country to start accession talks. Some of the conditions are a more effective fight against corruption and organized crime, the adoption of laws on the High Judicial and Prosecutorial Council (HJPC) and on the courts in BiH, and laws concerning conflict of interest and public procurement.

The Presidency of BiH supported the Readmission Agreement between the Council of Ministers of BiH and the Government of the Islamic Republic of Pakistan and the Proposal of the Protocol between the Ministry of Security of BiH and the Ministry of Interior of the Islamic Republic of Pakistan on the implementation of that agreement. Minister of Security Selmo Cikotić has been appointed as a signatory.

By concluding that agreement, BiH and Pakistan reaffirm their readiness to engage in international actions to prevent illegal migration, as the agreement regulates the reception of own nationals, third-country nationals and stateless persons residing in the territory of a contracting party contrary to the laws in force.

According to the established draft protocol, the competent authorities for receiving, submitting and processing readmission requests, as well as those for transit, are the Ministry of Security for Bosnia and Herzegovina and the Ministry of Interior of the Islamic Republic of Pakistan.