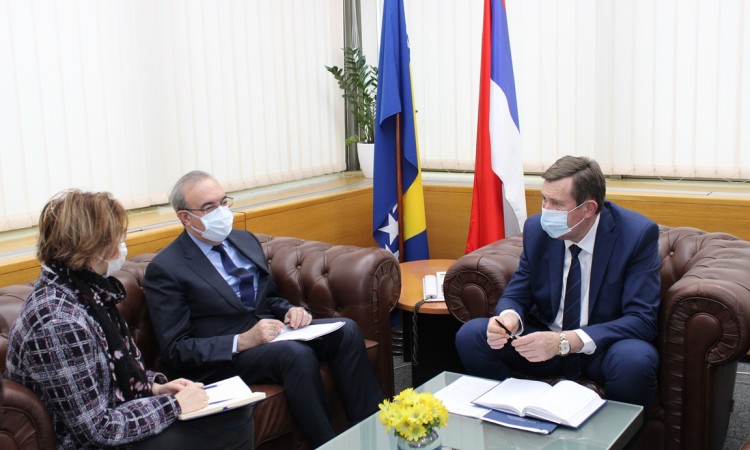 SARAJEVO, February 12 (FENA) – Minister of Communications and Transport of Bosnia and Herzegovina Vojin Mitrović met in Sarajevo today with Turkish Ambassador to BiH Haldun Koç and talked about continuing and accelerating the implementation of the Belgrade-Sarajevo-Belgrade motorway construction project.

The reason for the meeting is the signing of an agreement between the Council of Ministers of Bosnia and the Government of the Republic of Turkey on cooperation in infrastructure and construction projects, which will include that project.

As planned, the agreement will be signed on March 16 in Ankara by Bosnia and Herzegovina Presidency Chairman Milorad Dodik and Turkish President Recep Tayyip Erdogan.

The interlocutors also discussed Corridor Vc, the possibility of signing an agreement on mutual recognition and exchange of driver’s licenses between the BiH Council of Ministers and the Government of the Republic of Turkey, as well as a memorandum of understanding between the BiH Civil Aviation Directorate and the Turkish General Aviation Directorate.

Ambassador Koç underlined that Turkey remains fully behind its promise to support a project to build the motorway and an expressway connecting BiH and Serbia’s capitals, as evidenced by the signing of an agreement between BiH Presidency Chairman Dodik and President Erdogan.

Mitrović emphasized that the BiH Ministry of Communications and Transport will do its best to remove all administrative obstacles in order to start the construction of the motorway from Bijeljina to Sarajevo, as well as the expressway from Sarajevo to Višegrad and the border crossing with Serbia.