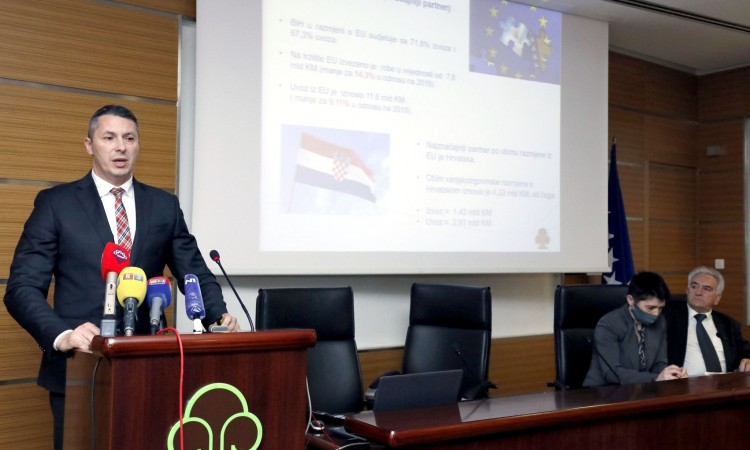 These are the data on last year’s exchange of Bosnia and Herzegovina with the world presented today at a press conference at the Foreign Trade Chamber of BiH, with special reference to the exchange with the country’s most important trade partners.

As a result of reduced exports and imports, the foreign trade deficit was reduced by 20 percent.

The coverage of imports-exports ratio with CEFTA countries was 65.05 percent, where Bosnia and Herzegovina records a surplus with all countries except Serbia, with which the ratio fell to 48.7 percent.

The participation of EFTA and other countries accounts for 16.6 percent of Bosnia and Herzegovina’s exports. BiH’s most important partner in EFTA is Switzerland.

In the so-called other markets or ‘third countries’, the most important foreign trade partner in terms of trade volume is Turkey, followed by China.

The volume of exchange with Turkey in 2020 amounted to about 1.09 billion KM. Exports to that country exceeded 316 million KM and was higher than in 2019 by 6.73 percent. Imports decreased by 6 percent and were around 782 million KM, while the imports-exports ratio decreased and amounted to only 40.4 percent.

In terms of other markets besides Turkey, Bosnia and Herzegovina has the largest volume of trade with China, where the imports-exports ratio is only six percent.

The decrease in exports and imports was recorded in trade with the United States of America and China, while exports to Russia increased, said today the representatives of the Foreign Trade Chamber of BiH.

The president of the chamber, Vjekoslav Vuković, said at a press conference that Bosnia and Herzegovina’s exports had dropped to nine percent with the coronavirus pandemic, but that it was slowly recovering since the end of the year.

The agriculture and food industries are recording an increase in trade, mainly due to agreements with Turkey.

Some growth was also recorded in the wood industry, as contracts for markets that could still receive the required goods, such as furniture, have survived.

Vuković spoke about transport in 2020 as areas with special characteristics due to a significant, albeit not complete stagnation in those conditions when state measures were uncoordinated, and everything required adjustment in the imports and transport of goods.

The problem of impeded transport is still relevant, Vuković concluded.

The economy of Bosnia and Herzegovina recorded a decline in GDP of 6.5 percent in 2020, while the labor market has declined in the past, in 2018 and 2019, and especially with the beginning of the pandemic.

Yet over time, growth has been recorded, not as a result of newly created value but of people getting back to work when rigorous measures eased during the pandemic.

Regarding the measures imposed by the crisis headquarters in Bosnia and Herzegovina, Vuković said that the Foreign Trade Chamber from the beginning appealed that they should not be adopted in general principle but adjusted to the branches of the economy individually since each is specific in its own way and that under certain conditions, production could have been better.

The appeal for the measures to be adjusted to the economic branches still stands, Vuković concluded.