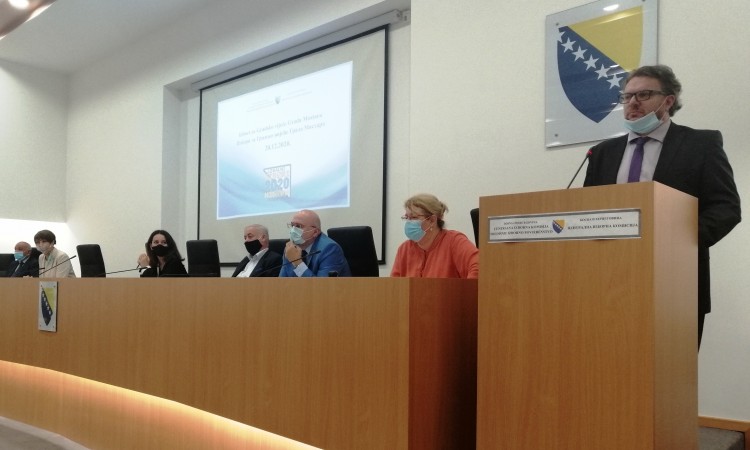 SARAJEVO, June 8 (FENA) – Members of the Central Election Commission (CEC) of Bosnia and Herzegovina presented today the institution’s proposals for changes to the BiH Election Law. The amendments have been proposed in all 20 chapters to ensure better implementation of the election process.

The draft of the initiative for the adoption of the Law on Amendments to the BiH Election Law will be sent to the Venice Commission and GRECO through the Council of Europe and the OSCE/ODIHR with a request for an opinion and will be published on the BiH Central Election Commission website.

The initiative envisions the introduction of some new concepts such as premature campaigning, misuse of public funds in the so-called official campaign, hate speech, early voting, early elections, extraordinary circumstances and election technology.

Also, the changes prescribe the possibility of imposing the strictest possible sanctions against political entities that obstruct the election process. The CEC also proposed solutions that would limit the number of preferential candidates on the candidate list of a political entity that voters can opt for to a maximum of three.

Such solutions, says the CEC, would reduce the size of the ballot, which would technically make the job easier in the event of the introduction of ballot scanning, and would increase the speed of determining the results and the cost of printing the ballot.

The proposed amendments would explicitly prohibit the elected authority or public office holder from using public resources in any type of election campaign or personal promotion or promotion of a political entity.

In order to improve the OSCE recommendations, the definition of hate speech has been incorporated and the time frame in which such speech is prohibited has been expanded, and due to the growing influence of social networks, provisions for a premature campaign have been introduced.

Increased amounts of financial sanctions in the criminal provisions of the law have been proposed, and the institute of early elections would be introduced in the Election Law for the first time, but only in cases when and if the Constitution allows and enables it.

As the CEC President Željko Bakalar explained today, that institution did not treat the solutions that imply changes to the BiH Constitution, because there must be a political agreement on that matter and they concern the parts of the Law that should provide for the implementation of Constitutional Court and European Court of Human Rights judgments.

He reminded of the importance of introducing new technologies in the election process, and the CEC has been advocating this for a long time, which was published in the book of the CEC member Suad Arnautović in 2017, and a project was done to improve the integrity and transparency of the election process.

That material was submitted to the Parliamentary Assembly of BiH, but it has not been considered yet, although it is financed by the taxpayers of the citizens of the European Union, and although the introduction of these technologies will depend on the parliamentarians.

Bakalar emphasized that the changes in the election legislation are one of the most important topics in 2021, and the CEC is aware of the political climate and the lack of a harmonized position on the participation of CEC representatives in the work of the Interdepartmental Working Group, despite the need expressed by the international community.

As concluded by the President of the CEC, they will be at disposal to the  PA BiH and the Interdepartmental Working Group in accordance with their powers and are ready to join the process, and he called on state parliamentarians to decide on the proposed amendments from an expert point of view.

After considering the submitted proposals, suggestions and remarks, the Central Election Commission of BiH will determine the final text of the Initiative in accordance with the competencies from the Election Law of BiH and submit it to the Parliamentary Assembly of Bosnia and Herzegovina.