Čović and Grlić Radman in Mostar: BiH’s Euro-Atlantic path has no alternative 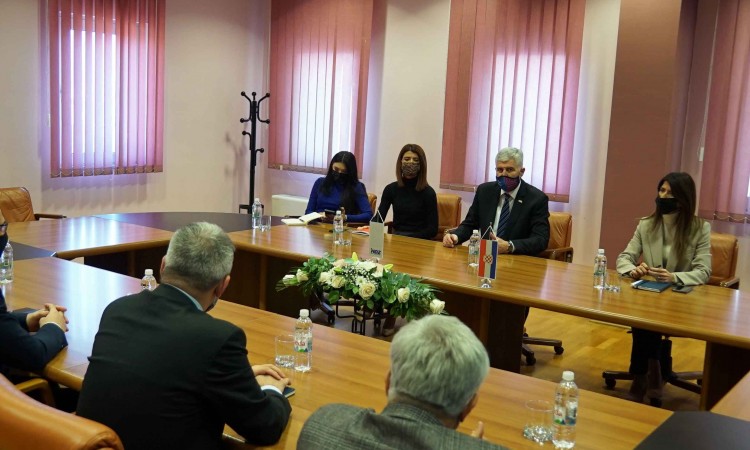 MOSTAR, February 2 (FENA) – President of HDZ BiH and Deputy Speaker of the House of Peoples of the Parliamentary Assembly of BiH Dragan Čović and Minister of Foreign and European Affairs of the Republic of Croatia Gordan Grlić Radman met today in Mostar and assessed that Bosnia and Herzegovina’s Euro-Atlantic path has no alternative and that Croatia is the country that encourages Bosnia and Herzegovina the most on that path.

“We want to help the Euro-Atlantic path of Bosnia and Herzegovina, and that is why it is necessary to change the Election Law in BiH. Of course, if you want a Euro-Atlantic path, then the next step is to obtain candidate status, and you will certainly have a constructive role of Croatia as a member of the European Union in order to realize this desired dream,” said Minister Grlić Radman.

Grlić Radman commented on the migrant crisis, saying that Bosnia and Herzegovina and Croatia should manage it together, with the help of European Union institutions. He also welcomed and supported the change to the BiH Election Law, saying it would eliminate all forms of inequality and discrimination.

Asked how he perceives the statements of the BiH Minister of Foreign Affairs, including the statement on Croatia’s role in the war in BiH and the decision to declare an economic zone in the Adriatic Sea, which Minister Bisera Turković questioned, the Croatian Minister replied that he had successful cooperation with the Minister and that he hopes it will remain so.

“The position on Croatia’s role in the war in BiH does not correspond to historical facts, and history cannot be forgotten. I think it is a lonely position, a statement that is not harmonized. We asked for a note to explain whether this is the position of all BiH institutions,” said Grlić Radman.

When it comes to the economic zone, he said that every country has the right to do so and Croatia did so primarily with the aim of comprehensive protection of the Adriatic Sea, fish stocks and the environment.

Čović expressed satisfaction with the recent establishment of the Mostar City Council and the election of Mostar’s mayor, expressing confidence that it will be HDZ BiH candidate Mario Kordić.

Regarding the changes to the BiH Election Law, he reiterated that the goal is to adopt those changes by the middle of this year at the latest, which, as he said, is a key priority and imperative in the future activities of the HDZ BiH.