Home BiH Čović: I am optimistic regarding the changes to BiH Election Law

Čović: I am optimistic regarding the changes to BiH Election Law 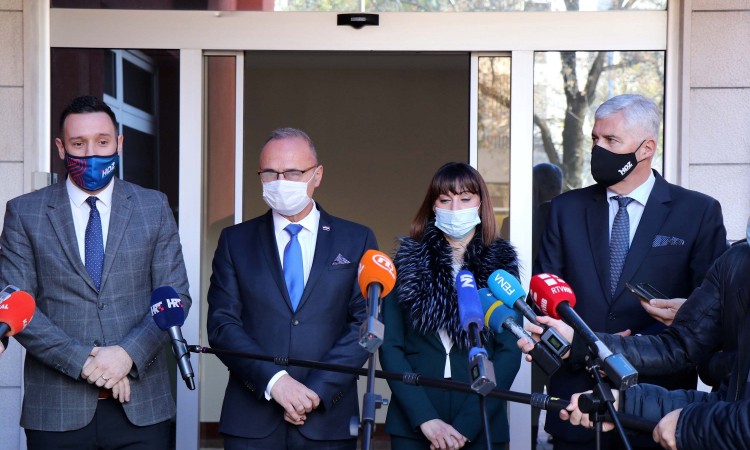 MOSTAR, November 29 (FENA) – I am very optimistic that in the first six months of next year we will make changes to the BiH Election Law that will ensure the legitimate representation of all three constituent peoples and make preparations to make a step towards European Bosnia and Herzegovina, and this will certainly require significant changes in relation to what is the basic Dayton Agreement, said yesterday President of HDZ BiH Dragan Čović after a meeting with a delegation of the Government of the Republic of Croatia held in Mostar.

“We have been searching for changes and solutions on shaping the Constitution of Bosnia and Herzegovina for 20 years now, in the wake of the transition from Dayton to the European phase, and that is something we will continue to do. Unfortunately, I do not feel that we have enough quality in the parliamentary debate, and it would have to have a two-thirds majority in both houses of the state parliament to make a change, and I am not very optimistic when it comes to that, but I am very optimistic that in the first six months we will have changes to the Election Law of BiH,” said the President of the HDZ BiH.

Minister of Regional Development and European Union Funds of the Republic of Croatia (RH) Nataša Tramišak, who as well as Minister Radman represent key departments when it comes to direct communication and cooperation with EU institutions, assessed that the challenges of the Croat people in Bosnia and Herzegovina today are great.

“We are unique when it comes to the direction of further development, improvement and strengthening of the quality of life, primarily in Mostar, and then throughout BiH. Croatia expects a generous offer in the new multiannual financial framework, which is more than 24 billion euros. For the territory of Bosnia and Herzegovina, we have the opportunity to use Interreg IPA Croatia-BiH-Montenegro and we can say that already now, in this programming period, there were quality projects and cooperation, and in the context of the new 184 million euros. It is important to mention that the Republic of Croatia is also planning a new program of cooperation with BiH from the national state budget,” Tramišak underlined.

“Croatia sees Bosnia and Herzegovina as a stable and functional entity at all levels in which all three constituent peoples will have a harmonious relationship. Croatia strongly supports Bosnia and Herzegovina on its path to the European Union, but also for NATO membership, and BiH will really have a sincere and true advocate in Croatia,” said Radman.

He emphasized that he hoped that the elections in Mostar would finally bear fruit so that the election of a mayor and a stable city government would guarantee development for the benefit of the citizens of Mostar.