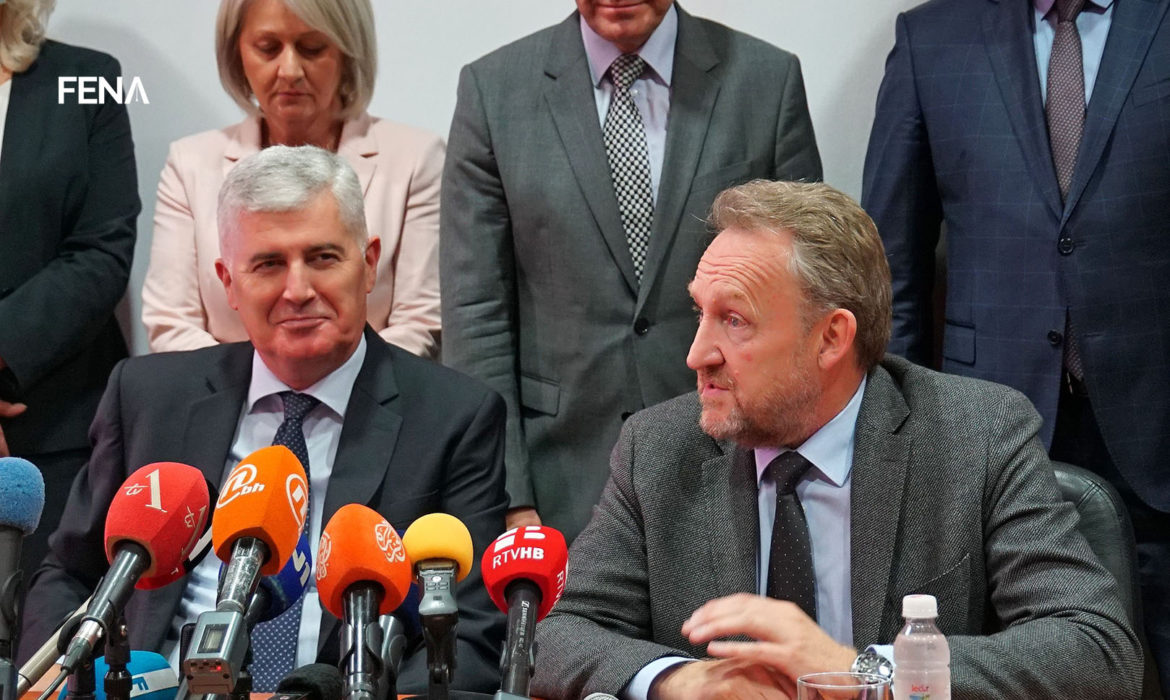 MOSTAR, November 7 (FENA) – A meeting between the delegations of the Croat Democratic Union (HDZ) of BiH and the Party of Democratic Action (SDA) ended without an agreement on the process of government formation at all levels, but the President of HDZ BiH Dragan Čović and SDA President Bakir Izetbegović said that they have done a lot on “approaching their political views” and “relaxing the atmosphere”.

“There is nothing dramatically new, but there is a good atmosphere between the HDZ and the SDA. There is willingness to compromise on very important matters, such as the Election Law, the implementation of the judgments of the Strasbourg Court and the Constitutional Court,” Bakir Izetbegović said after the meeting at a joint press conference.

Dragan Čović agreed that the atmosphere is much better now, and that if one continues to approach political views and create an atmosphere of confidence, a “visible step” can be made.

“I think we will continue to talk in that spirit. Next week, we will make a joint collegium of both Houses of the Parliamentary Assembly of Bosnia and Herzegovina to discuss topics that are still burden and find solutions,” Čović said.

He added that next year, during Croatia’s Chairmanship of the European Union, when deciding on the candidate status of North Macedonia and Albania, Bosnia and Herzegovina is given a chance to be in that package, and the only obstacle, according to Čović, is the government formation and defining plans for the European future of BiH.

Čović and Izetbegović agreed that while party negotiations are ongoing, their representatives in executive power at all levels continue to work and solve problems in order to stabilize the economic and social situation.

“We agreed that daily life, that is, the functioning of government at all levels, should not be called into question. The results of these governments are not bad. Everything in BiH is advancing at a rate of three to five percent, GDP, industrial production, number of tourist visits, number of employees. We are turning the Federation of BiH into a big construction site, but if we do not form a new government, it will slow down and stop,” said Izetbegović.

According to him, HDZ BiH and SDA disagree with the issue of the Action Plan for BiH’s NATO membership. The HDZ BiH believes that the issue should not have been linked to the formation of a new convocation of the Council of Ministers of BiH, while the SDA considers it a matter of protecting the rule of law.

“After all, the way out is to reach a compromise and everyone must make a step forward. Neither side can dictate and I hope there will be more understanding and that we will reach compromise by the end of the year,” said the SDA President.

As for the Election Law, Izetbegović believes that it is impossible to reach an agreement in the short term, but some principles can be agreed to guide negotiators in future discussions on this issue.

When it comes to lower levels of government, Čović and Izetbegović have announced that they will encourage cantonal organizations of the SDA and HDZ BiH to form the government in the Herzegovina-Neretva Canton.

Presidents of the SDA and HDZ BiH also discussed the situation in Mostar. Izetbegović reiterated the SDA’s position that the issue of local elections and the Statute of the City of Mostar should be addressed by law at the FBiH level, and that the solution for Mostar must entail a series of “protective measures” that would prevent the domination of one nation over another.

Čović, on the other hand, said that the judgment of the European Court of Human Rights in Strasbourg must be respected and that there is no reason for Mostar to be an exception to Tuzla, Zenica or Banja Luka.