Home BiH Dodik: Bosniak politics is to blame for not respecting the demands of Croats

Dodik: Bosniak politics is to blame for not respecting the demands of Croats 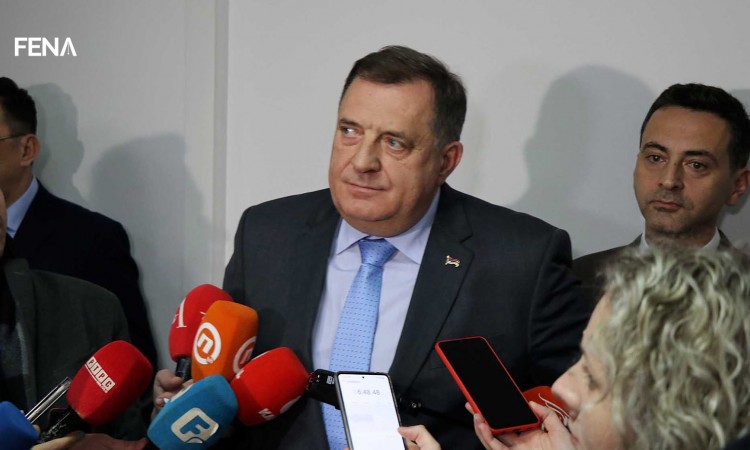 MOSTAR, December 16 (FENA) – BiH Presidency member Milorad Dodik said that the Bosniak side is the most responsible for the current political crisis, because it did not want to respect the legitimate demands of Croats.

Dodik made the statement in Mostar, where he and Republika Srpska President Željka Cvijanović and BiH Council of Ministers Chairman Zoran Tegeltija spoke with representatives of the Serb community in the city.

Deputy Speaker of the Mostar City Council, Velibor Milivojević, said that the visit and support meant a lot to them.

Dodik promised further support to the Serb community in Mostar, and then commented on the conclusions of the RS National Assembly regarding the return of competences from the state to the entity level.

“We have clearly defined and articulated all our policies and they will not change. All that arrogant force that goes the other way doesn’t help, it just retaliates. They captured BiH. They have been holding the colony in BiH for 25 years. It is not true that the biggest crisis in BiH is now, BiH is constantly in crisis. We had a meeting yesterday where Sattler said he’s been here for 26 months and that 20 months is a standstill. You remember when the SDA blocked the election of the Council of Ministers of BiH, then they told you that it was okay, that it was politics, and this is politics as well,” said Dodik.

He underlined that he has no intention of giving up his interests and goals.

“When everything is over, without intending to name those to blame, in the end the Bosniak political elite will remain the one to blame because it did not respect the legitimate demands of the Croat people for adequate representation, because it does not and will not respect the BiH Constitution and is arrogant and ignorant of all objections, and we have come to the conclusion that some constitutional court introduces us the right that members of the Armed Forces may have religious beards, religious insignia, and this will all complicate this situation.

Asked by reporters about the possible formation of the RS army, Dodik said he was primarily in favor of demilitarizing BiH.

“I said that such a military structure must be established in BiH in which no one can dominate and in which all three peoples must be equally represented, both in terms of military composition and command. I suggest that the number of members of the Armed Forces of BiH be set at 5,000, that the number of Bosniaks, Croats and Serbs be clearly determined, that such a structure be established and then the RS Army is not needed then,” said Dodik.

He added that Bosniaks, if they want Bosnia and Herzegovina, must talk to Serbs and Croats.