Home BiH Dodik: We will not agree to impose any OHR decisions

Dodik: We will not agree to impose any OHR decisions 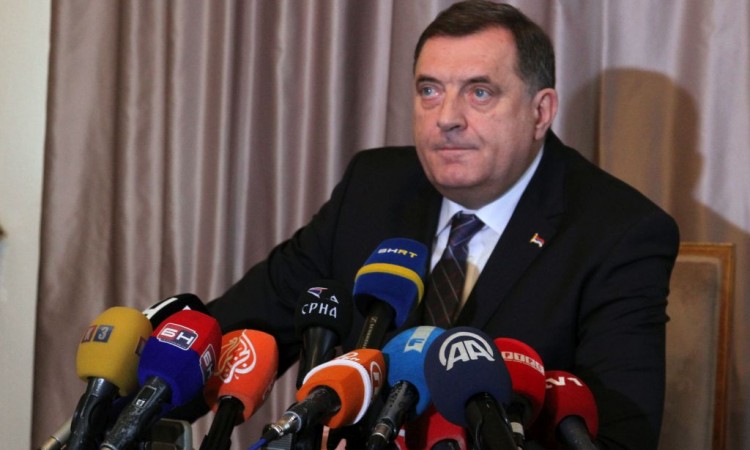 EAST SARAJEVO, February 4 (FENA) – Chairman of the Presidency of Bosnia and Herzegovina Milorad Dodik said today at a press conference in East Sarajevo that the persecution of Serbs should stop, reacting to the request of High Representative Valentin Inzko to annul honors to war criminals.

Namely, Inzko sent a letter to the leadership of the RS Entity Assembly and the presidents of all caucuses in that entity legislature, requesting that the charters granted by the Assembly to persons convicted of war crimes be annulled within three months.

According to Dodik, his people did not receive well such an ultimatum, especially because, as he assessed, Inzko inflicted too much harm on them, reminding them that the Republika Srpska has made a serious departure from the international community.

“If he said that the names of schools and facilities in the Federation of BiH should be changed, that would have a different weight,” Dodik believes, announcing that he will not agree to impose any decisions from the Office of the High Representative in BiH.

He confirmed that he was called to the Prosecutor’s Office of BiH today as a witness regarding the Orthodox relic affair, but that he was not presented with evidence of committing any criminal act or indictment.

The Prosecutor’s Office of Bosnia and Herzegovina previously confirmed for FENA that Milorad Dodik, the Chairman of the Presidency of BiH and the leader of the Alliance of Independent Social Democrats (SNSD), was questioned in connection with the Orthodox relic affair, but without presenting evidence of the crime.

Dodik added that the Prosecutor’s Office asked him who organized the visit of Russian Foreign Minister Sergei Lavrov, but when asked where the relic was and whether it is still in the treasury in East Sarajevo, Dodik said that he had finished giving statements regarding the Orthodox relic.