Home BiH Džaferović: Focus from migrant crisis in USC has to shift onto economic progress

Džaferović: Focus from migrant crisis in USC has to shift onto economic progress 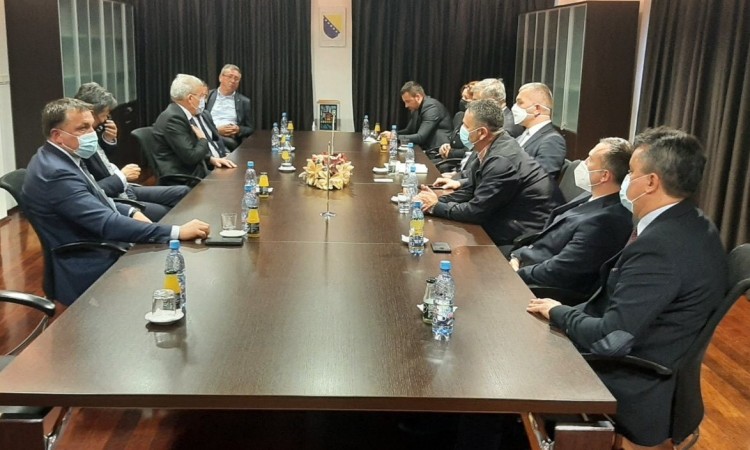 BIHAĆ, February 21 (FENA) – Member of the Presidency of Bosnia and Herzegovina Šefik Džaferović, the FBiH Prime Minister Fadil Novalić, Minister of Agriculture, Water Management and Forestry Šemsudin Dedić and an MP Hamdija Abdić during their visit to Bihać on Saturday held a meeting with the Mayor Šuhret Fazlić, announced support in the implementation of important economic and development projects for the city.

“Recently, we have only received news from the Una-Sana Canton about the migrant crisis and problems, as if that is the only content of life here, and that is unacceptable for us. We have begun systemically addressing the migrant crisis which includes the Presidency of BiH, the Council of Ministers, especially the Ministry of Security with Minister Cikotić, but also the cantonal and city authorities.

We now need to address the issues of development, economics, education and health. That is why today we primarily talked about it and all of us together announced help and cooperation for the most efficient use of the huge resources of this part of the country. From now on, we want more such news from Bihać and this region,” said Džaferović.

The Mayor of Bihać, Šuhret Fazlić, confirmed that, among other things, they discussed the current project of building an airport in Bihać, and solving the problem of the damaged building of the City Health Center in the recent earthquake.

“Since the competent state institutions got involved in solving the problem of the migrant crisis, the situation in the city of Bihać has significantly improved. That enabled us today to talk about development and infrastructure projects, and I am really happy with the receives support from Prime Minister Novalić and a member of the Presidency of BiH Šefik Džaferović.

The topics that we covered were the airport for which the FBiH Government provided 25 million KM, as well as solving the problem of the damaged building of the Health Center in Bihać, for which three million KM were also provided from the FBiH budget. There will be no lack of support when it comes to road-traffic projects, which we are also extremely happy about,” Fazlić added.

The BiH Presidency member Šefik Džaferović and a delegation of the FBiH Government led by Prime Minister Novalić and ministers Dedić and Ramić visited Bužim today to attend the celebration of the Municipality Day. On this occasion, Džaferović officially opened the newly built “Alija Izetbegović” Square, and he was also awarded the title of honorary citizen of Bužim.