Home BiH Džaferović: The adopted decisions should help in resolving the migrant crisis

Džaferović: The adopted decisions should help in resolving the migrant crisis 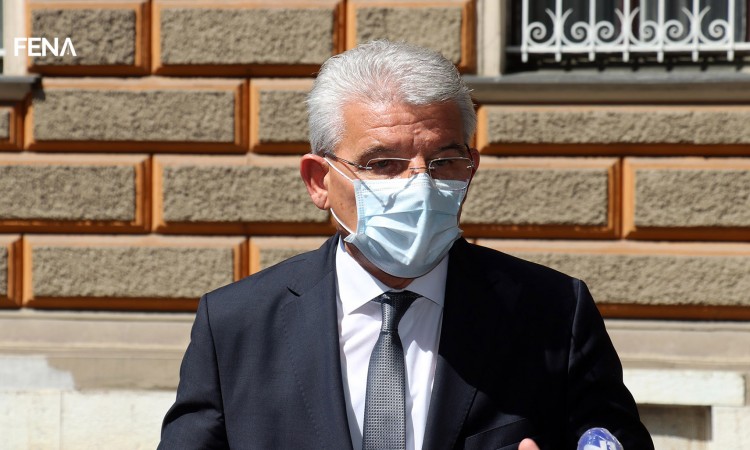 SARAJEVO, August 27 (FENA) – The Presidency of Bosnia and Herzegovina discussed numerous items on the agenda today, including giving agreements to ambassadors and signing international agreements, but one of the most important issues discussed was the migrant crisis, confirmed to reporters in Sarajevo after the session the Chairman of the Presidency of BiH, Šefik Džaferović.

The Presidency accepted the Information on the state of migration in BiH for the month of May, which was presented by the Minister of Security of BiH, Selmo Cikotić, but Džaferović asked that the current situation when it comes to the migrant crisis be considered as well.

The presidency also offered several decisions that should help manage the migrant crisis more easily, including the protection of the BiH border, as well as a gradual reduction in the number of migrants in BiH.

The BiH Council of Ministers was again asked to finally submit to the Presidency a comprehensive plan and program for resolving the migrant crisis, and today the Council of Ministers has been obliged to provide personnel and material resources for better protection of the state border by strengthening the BiH Border Police.

Adequate coordination of all police agencies in BiH was requested from the Council of Ministers and the Ministry of Security in order to protect the state border and personal and property safety of citizens and preserve public order and peace, because, as Džaferović noted, that coordination has not been lacking so far.

Also, the Presidency asked for speeding up of procedures related to concluding readmission agreements with the countries from which migrants come, and a few days ago such interest was expressed by the Islamic Republic of Pakistan and the agreement should be finalized before Džaferović travels to that country in October this year.

“The Presidency also concluded that the migrants accommodation must be relocated from populated areas and we instructed the Council of Ministers to immediately allocate five million KM from the budget reserve to that end, and the support of the European Commission was also requested,” Džaferović underlined.

At the session of the Presidency of BiH, the Council of Ministers of BiH was asked, given the situation with coronavirus pandemic, to enable entry into BiH for citizens of the United States, Russia, China and Turkey on a reciprocal basis in accordance with the views of health authorities managing the health aspect of the pandemic.

The BiH Presidency member Milorad Dodik announced the launch of a vital national interest veto over one of the items on the agenda – the “Memorandum of Understanding between the BiH Central Election Commission and the International Foundation for Electoral Systems (IFES)” – to ensure the organization’s services in cyber security during the elections, but Džaferović believes that this matter is being unnecessarily labeled as a problem.

“There are various agencies that observe elections in all countries of the world, and people from that organization would neither make decisions nor have the authority except to help our staff in conducting elections. We want electoral security and to ensure the will of the citizens is being respected, and this engagement is planned precisely because of that,” Džaferović explained.

He also referred to the issue of support for the Declaration of the European Union regarding the elections in Belarus, confirming that Željko Komšić, a member of the Presidency, together with him, was also in favor of supporting the declaration, but Dodik was against it.

The Presidency was previously informed that the BiH Ministry of Foreign Affairs had already supported the declaration on behalf of BiH, and the BiH Foreign Minister Bisera Turković explained to Džaferović that this was done because BiH generally supports the EU positions on international and foreign policy.