Home BiH East West Bridge: Bosnia and Herzegovina for all of us

East West Bridge: Bosnia and Herzegovina for all of us 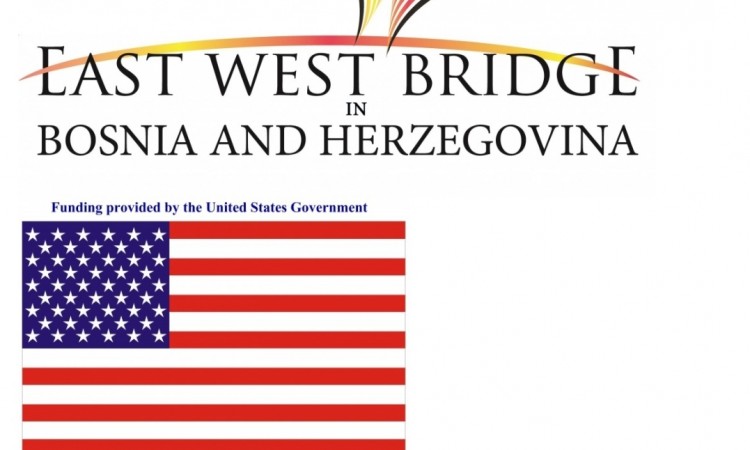 SARAJEVO, November 24 (FENA) – At the advanced workshop “Harnessing the Power of Cooperation” held in Jajce in the period 20-22 November 2020 on the occasion of the 25th anniversary of the establishment of the General Framework Agreement for Peace in Bosnia and Herzegovina, which was attended by students from Banja Luka, Bijeljina, Brčko, Mostar, Sarajevo and Tuzla, the proposals how to improve the system of governance at different levels in the following areas were adopted.

The final “advanced workshop” for 18 most prominent students was held in Jajce, from November 20 to 22, when they had the opportunity to harmonize the text of the declaration on their vision of the political and social issues of Bosnia and Herzegovina and to propose solutions to current problems. The US Ambassador Eric Nelson addressed the participants in Jajce at the opening, saying that he has high expectations of young people in BiH and that reforms should be encouraged by citizens and elected officials, and that they must be guided by the principles of dialogue and compromise.

For many participants, the meeting in Jajce was the first meeting with peers from another entity, and the first experience of debating important political topics. The students reached a high level of agreement on the political system, economic reforms, the fight against corruption, the education system, the departure of young people, the media, the health sector and the environment. In the end, they said that they want to contribute to stability and peace in Bosnia and Herzegovina, and its path to a better future, a fairer and more functional state structure, in which all peoples and citizens have equal rights and equal chances for all, announced the East West Bridge in BiH.

The views expressed and recorded in the Declaration reflect only the views of the students who participated in reaching these conclusions by consensus, not the East West Bridge in BiH nor they reflect the views of the US Embassy in Bosnia and Herzegovina which supported this project.

We deliver the Declaration in its entirety below.

1) We advocate a firm commitment of Bosnia and Herzegovina to respect European values ​​and ideas, as well as to harmonize legal regulations with the European Union laws, and we encourage the strengthening of regional cooperation (support for the “Mini Schengen” initiative) and bilateral relations.

4) We are committed to the realization of the principles of national (original – narodne) and state sovereignty and its operation within each of the three branches of government. We oppose the practice of displacing relevant decision-making from the institutions of Bosnia and Herzegovina, which is a denial of the importance of the meaningful democratic political systems.

5) We want the governments at all levels to work in the interest of the citizens of Bosnia and Herzegovina.

6) Recognizing corruption as one of the urgent matters in society, we call for a systematic fight against corruption and organized crime in all parts of society. Competent institutions in charge of eradicating corruption must take decisive steps through all available mechanisms and using positive examples.

7) Economic reforms as the basis of economic self-sustainability is in the common interest of all citizens and in the interest of an independent and sovereign state. We are convinced that reducing taxes for new investments, including those from the diaspora, would lead to improved conditions for the development of the domestic market. Domestic production can be improved by providing incentives to the real sector.

9) The education system in Bosnia and Herzegovina needs to be harmonized with the best world standards. We strongly oppose the elements of segregation and discrimination in education systems. It is high time that the education system responds to the needs of the labor market, and that the labor market enables students to gain practical experience. We advocate for enabling talented individuals and professionals, both domestic and those who have left the country, to play an active and advisory role in education reform in Bosnia and Herzegovina. We encourage pupils and students, as well as the management of educational institutions, to participate even more and support student exchange programs, both within Bosnia and Herzegovina and outside the borders of Bosnia and Herzegovina. We believe that complete freedom is necessary in teaching and scientific research, and artistic creation without the interference of public authorities in the implementation of scientific and teaching processes.

10) Young people have identified two key problems of leaving Bosnia and Herzegovina, namely political and socio-economic instability. We urge the competent authorities to come out with concrete measures towards young people that will prevent further departure and promote their active return.

11) We agree that it is necessary to depoliticize the media, especially public service media. We call on regulatory bodies to take a stronger and more active role in meeting their legal obligations by ensuring effective mechanisms that will enable objective and impartial reporting in public media services in Bosnia and Herzegovina.

12) The reform of the health sector should ensure the improvement of primary health care service and lead to the creation of satisfactory conditions for the work of medical staff. We demand that health care be provided to all citizens of Bosnia and Herzegovina in any part of the territory of Bosnia and Herzegovina if they have adequate insurance from one of the health insurance institutes.

13) We emphasize the need to improve the supervisory system in the election process, and the introduction of electronic vote scanning.

14) It is necessary to introduce the e-citizen system (use of digitalization and e-platforms) in order to reduce administrative costs, administrative apparatus, and to ensure better efficiency of the public sector.

15) It is the duty of all of us to provide future generations with the same or better conditions in which they will be able to develop and live in a healthy environment. We want Bosnia and Herzegovina to be able to preserve all its landscapes and natural resources so that they are accessible to both the citizens of Bosnia and Herzegovina and foreigners. We demand compliance with and stricter regulations that:

– Protects all forest and biological areas,

– Supports recycling and the use of biodegradable materials (ecological waste management),

– Regulates strategic planning during the construction of infrastructure facilities, with the involvement of the local community in making the best decisions,

– Defines better the conditions for granting concessions on natural resources and goods.

We hope that the period ahead will be marked by stability, visible economic growth and the well-being of all the inhabitants of Bosnia and Herzegovina.