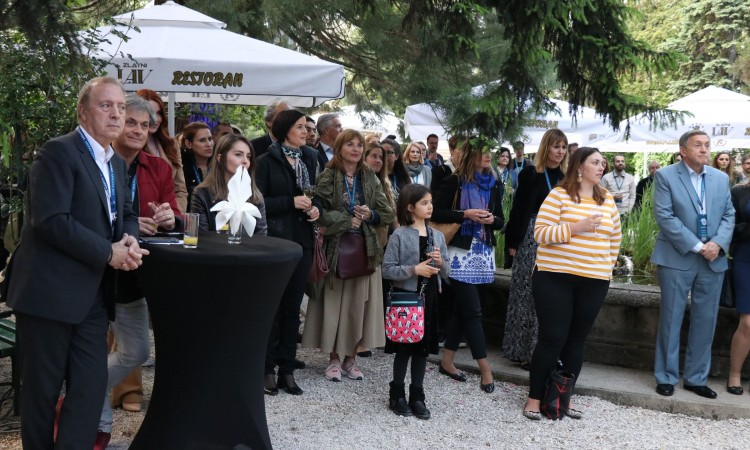 Minister of Culture and Sports of the Sarajevo Canton Mirvad Kurić said at the opening ceremony that museum activities cross the borders established by political or geographical constraints, as it is witnessed by this conference as well.

Since this kind of conference, which has been held for 40 years, for the first time takes place in Sarajevo, the hosts pointed out the significance of this event for the entire Bosnian-Herzegovinian cultural scene and emphasized the beauties of the host city, which will gather about 250 participants from more than a hundred European museums.

The European Museum of the Year conference will be held from May 22 to May 25, and its working part will begin tomorrow morning at UNITIC Center.

The event has been organized since 1977, when the European Museum Forum began to represent the work of European museums encouraging their excellence and quality.

Today, the conference is one of the most prestigious events on the cultural and museum scene, which enables the exchange of experiences and good practices from experts from all over Europe.

Although holding of such an event in the capital of Bosnia and Herzegovina is of great importance for the affirmation of BiH cultural scene, it should be emphasized that this is the first time that domestic museums have the opportunity to present their work and activities in the official EMYA conference program.

The main theme of this year’s conference is innovations in the European museum scene, and the discussions will be grouped according to the narrow specialization of museums such as world history, conflicts, national heritage, environment, literature and arts.

Although it has the role of networking and learning, the event is primarily organized with the aim of recognizing and rewarding those museums whose approach shows particular innovation, as well as advocacy for the values ​​of tolerance and respect for human rights.

Throughout forty years of work, the European Museum Forum has been continuously working on the promotion and development of the quality of European museums.

The European Museum of the Year Award was founded by Kenneth Hudson and Richard Hoggart in 1977 under the auspices of the Council of Europe.

A total of 40 museums from 17 European countries have been nominated for five awards: European Museum of the Year, Council of Europe Museum Prize, Kenneth Hudson Prize, Silletto Prize, and Portimao Museum Prize.

The War Childhood Museum is the winner of the 2018 Council of Europe Museum Prize, which opened the door for the 2019 hosting of the conference.

The four-day conference, which is expected to be attended by around 250 participants, is a combination of workshops, lectures and panels, and will be completed by a gala award ceremony, which will be held at the National Theater in Sarajevo.

Other locations include the Unitic Business Center, the National Museum, the Museum of Contemporary Art ‘Ars Aevi’, the residence of the British Ambassador to BiH, and the War Childhood Museum.

The distinguished lecturers who will take part in the event are: Suay Aksoy (President of the International Council of Museums – ICOM), Deyan Sudjic (Director of the Design Museum in London, European Museum of the Year for 2018), Jasminko Halilović (Director and founder of the War Childhood Museum), and Sharon Heal (Director of the Association of the Museums of the United Kingdom).

More than 50 speakers from some of the most important and innovative European museums will participate in the panels, and the program is available at the conference website: http://www.emya2019.com.

This event is supported by the Sarajevo Canton Tourism Board and the Delegation of the European Union to BiH as the general sponsors. The main sponsors are Embassy of Italy in BiH, Embassy of Great Britain in BiH, New Event and Ibe, and the partners are the National Theater Sarajevo, National Museum of Bosnia and Herzegovina, Museum of Contemporary Art ‘Ars Aevi’, the Memorial Fund, Embassy of the Republic of Slovakia and Embassy of the Netherlands.

Every year the most innovative museums in Europe gather at the EMYA Conference and Awards Ceremony to showcase their work, to network, and to learn from each other. This is a unique opportunity for those who are planning to create a new museum or to renew an existing one, to learn about the latest developments in the public quality of museums.