Home BiH Events that marked 2021 in Bosnia and Herzegovina

Events that marked 2021 in Bosnia and Herzegovina 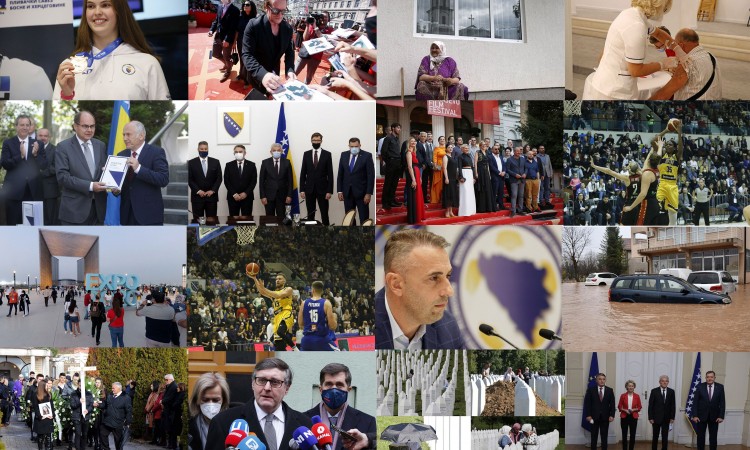 SARAJEVO, December 30 (FENA) – Last year was generally not good for Bosnia and Herzegovina and its citizens. The very beginning of 2021, when eight young people died on New Year’s Eve as a result of suffocation by gas in Posušje, announced what year awaits us. In addition to this, in October we were hit by another similar tragedy when six people were killed in a fire in Brčko, including two children.

However, this year was marked by partial justice for the families of more than 8,000 killed in Srebrenica in 1995, as Republika Srpska Army wartime commander Ratko Mladić was found guilty of the most serious war crimes, including genocide, on June 8 and sentenced to life in prison. He was convicted on 10 of the 11 counts in the indictment.

A month later, the 26th anniversary of Srebrenica genocide was marked, when the remains of 19 victims were buried in the Potočari cemetery. The president of the Association “Women of Srebrenica”, Hajra Ćatić passed away this year and never buried the remains of her son, journalist Nino Ćatić, who last appeared on the RTV BiH program on July 10, 1995, since when he has been missing.

In June this year, Fata Orlović finally waited for the illegally built church to be removed from her yard in Konjević Polje. All the world’s media wrote about this because Fata became a symbol of perseverance without giving up on the legal battle that lasted for years.

In political terms this has also been a very turbulent year. After the local elections, Mostar finally got a new mayor. The mayor Mario Kordić and the city administration have a lot of work to do in the largest city in Herzegovina. After a 12-year term as High Representative of the International Community in BiH, Valentin Inzko was replaced by German diplomat Christian Schmidt. Inzko ended his term by imposing amendments to the Criminal Code that prohibit genocide denial and glorify war criminals. This was the reason for the blockade of the work of state institutions, because the representatives from the Republika Srpska refused to participate in the work of the Presidency, the Parliamentary Assembly and the Council of Ministers of BiH until, according to them, the disputed article of the law is withdrawn.

The continuation of the biggest political crisis in BiH after the signing of the Dayton Peace Agreement followed a few months later, when the RS National Assembly adopted conclusions on the transfer of competencies from state institutions to the BiH entity of RS in the field of justice, indirect taxes, security and defense.

The Delegation of the European Union and the US Embassy in BiH said that renewed efforts to mediate negotiations before the end of the year would not bear fruit, and that the results will be visible only when the parties work together to find a solution.

This 2021 was the second year of the coronavirus pandemic, and vaccination of the BiH population began only in April, making BiH the last country in the region to embark on this process. Unfortunately, interest in immunization in BiH is quite low, and mortality from Covid-19 is among the highest in the world.

Although BiH has been struggling with a large influx of migrants for several years, this year the number of people coming to BiH illegally has been significantly reduced, and the state has partially resolved the issue of accommodation by opening a new Lipa reception center in Bihać.

The last year will be remembered for the fact that 12 scientists from the Academy of Sciences and Arts of BiH were on the list of the most cited scientific authors in the world from various disciplines, and they are academics and scientists who have decades of scientific work behind them.

This year, the Sarajevo Film Festival was held in a hybrid format. When it comes to the field of culture, the film “Quo vadis, Aida” by BiH director Jasmila Žbanić won numerous awards this year. Among them is one of the most significant in the field of film art, as it was named the best film in 2021, and it was one of five films from around the world that competed for the Academy Award for Best International Feature Film.

In BiH sports, the most significant results this year were achieved by swimmer Lana Pudar, who won numerous medals, including gold and two silver medals from the European Junior Championships in Rome, and at the end of the year she won a bronze medal at the World Championships in Abu Dhabi.

BiH basketball teams were also successful. The BiH women’s basketball team, led by the world’s best player Jonquel Jones, won fifth place at the European Championships and qualified for the World Cup in Japan. For the second time, BiH handball players won a performance at the review of the best European teams, while the national football team received a new coach at the beginning of the year, Ivaylo Petev, under whose leadership it achieved one of the worst results in history.