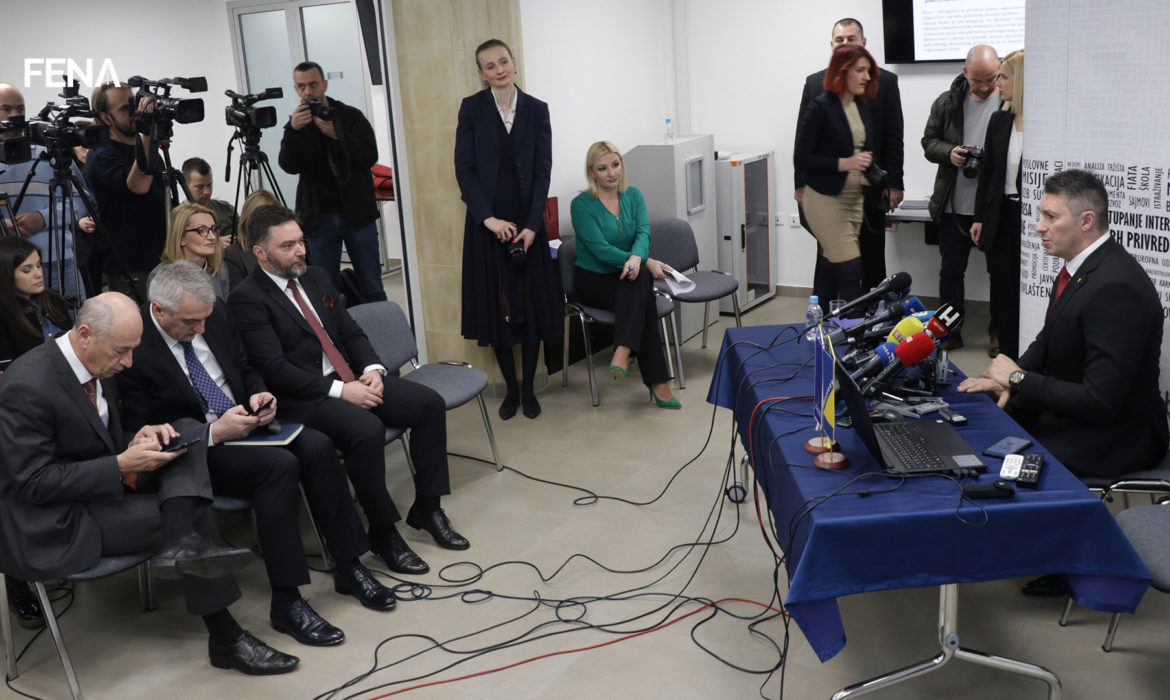 SARAJEVO, February 18 (FENA) – Technology innovation, new products, certification, branding and entering new markets are some of the priorities for improving BiH’s GDP and overall foreign trade exchange, it was stressed today at a press conference in the Foreign Trade Chamber (FTC BiH) in Sarajevo.

President of the FTC BiH Vjekoslav Vuković and Minister of Foreign Trade and Economic Relations of BiH Staša Košarac spoke about foreign trade results in 2019 compared to the previous year, as well as the exchange of our country with the most important trading partners.

Vuković said that the exports from Bosnia and Herzegovina amounted to 11.86 billion KM last year and imports to slightly less than 20 billion KM.

“The 3.17 percent drop in exports, which is about half a billion KM, was due, among other things, to the excessive customs tariff on exports to Kosovo, where we lost the market worth 132 million KM and the 300 million KM of turnover that Aluminij Mostar alone made in the past, but unfortunately the company is no longer operational,” said Vuković.

Germany, Croatia, Serbia, Italy and Austria are still the most significant foreign trade partners of BiH, the largest with the EU member states. When it comes to BiH exports, Vuković says the share of EU member states is 72 percent, CEFTA countries 17 percent, and EFTA 2.3 percent.

Goods worth 1.69 billion KM were exported to Germany, which, according to Vuković, is a significant amount, although some stagnation has been recorded.

The 3.17 percent drop in exports, explains Vuković, is not only related to the situation regarding exports to Kosovo and the shutdown of Aluminij Mostar, but problems are also occurring in terms of a decline in industrial growth in Germany, where demand for certain auto industry products from BiH has declined. This was also influenced by the change in fiscal policy in Italy, as well as by Brexit.

According to Vuković, some of the necessary measures to reduce the deficit and increase economic activity relate to improving the GDP growth rate through innovation and attracting investment, especially to the manufacturing industry.

There is also an intensification of public infrastructure works, entering the new markets, and the strengthening of economic ties with the region.

Minister of Foreign Trade and Economic Relations, Staša Košarac recalled that BiH has taken over the chairmanship of CEFTA this year, and said it will seek more BiH involvement in CEFTA.

He added that the EU is in the course of reviewing its decision to ban the import of steel from BiH and the Western Balkans, adding that everyone should become involved in this process in order for BiH to substantiate with credible arguments the EU’s exemption from those measures.

“Such measures also affect the Ljubija Mine and ArcelorMittal Zenica and the entity railways and that is only one of the reasons why we should not remain silent on such decisions,” said Košarac.

He emphasized that it is important for the BiH economy to continue finding new markets.

“Entering new markets will be a difficult job that we all need to get involved in, but new markets are necessary for us to increase foreign trade. Our industries, such as the metal, utility, electrical, wood and food industries, as well as tourism, have a significant foreign trade turnover, which will be even larger when we open up new markets,” said Košarac.

He added that foreign investment should be fostered and to be more accountable to the business community, which should be enabled to develop and place its products on those new markets.

“We want to preserve the domestic economy, first of all, through amending the laws, the use of a number of financial funds for the development of our agricultural and other production, and we will work to protect our interests through participation in certain bodies such as CEFTA,” said Košarac.

The Ministry of Foreign Trade and Economic Relations will do everything it can for BiH to become a full member of the World Trade Organization this year.