Home BiH Ghelichkhan: Iran and BiH have the potential for comprehensive relations

Ghelichkhan: Iran and BiH have the potential for comprehensive relations 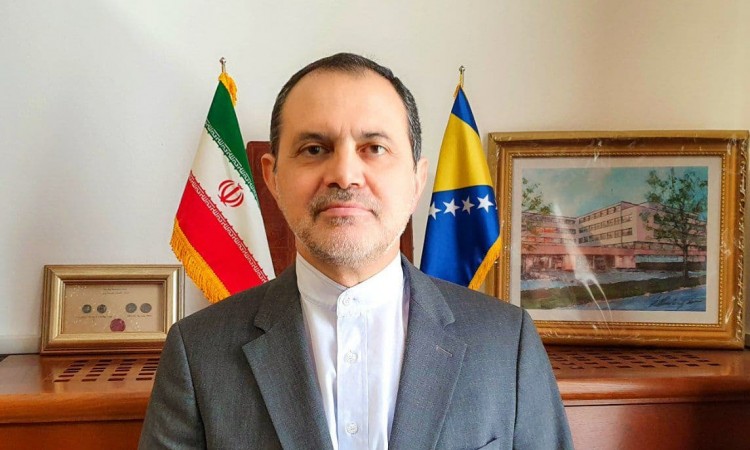 SARAJEVO, February 7 (FENA) – Iran and Bosnia and Herzegovina have significant potential for comprehensive development of relations and additional efforts should be made to use these potentials, said the newly appointed Ambassador of the Islamic Republic of Iran to Bosnia and Herzegovina Gholamreza Alimohammad Ghelichkhan in an interview with FENA.

Ambassador Ghelichkhan noted that he was proud that Iran was among the first countries to recognize the independence of BiH and to stand by the people in BiH in the most difficult of circumstances and did not hesitate to provide any possible assistance. And in recent years also, despite certain ups and downs, as Ambassador Ghelichkhan added, relations between the two countries have always been at an appropriate level.

“As the Ambassador of the Islamic Republic of Iran, I would like to emphasize my country’s foreign policy approach, which supports the consolidation of peace and stability in the Western Balkans, especially in BiH, as well as the Islamic Republic of Iran’s support for BiH’s territorial integrity and national sovereignty. The Embassy’s agenda includes efforts to expand cooperation in all possible areas,” the Iranian Ambassador pointed out.

Based on the conversations he has had so far with BiH officials, the two sides are determined to remove obstacles, including the provision of visa facilitation and facilitation of payments for tourists and businesses, thus creating appropriate preconditions for increased cooperation and tourism exchange between the two countries. An amendment to the list of goods contained in the Preferential Trade Agreement is on the agenda in order to facilitate and develop trade and investments.

“We must provide space for private sector cooperation, as well as financial and banking relations between the two countries by removing obstacles and introducing the necessary incentives to expand relations between the two countries. Regarding the promotion of economic relations with BiH, the President of Iran emphasized that we are ready to expand cooperation with BiH, that the development of tourism is one of the areas adequate for cooperation and in that sense the necessary facilities for tourist travel and communication between our citizens should be provided,” Ghelichkhan added.

He reminded that several economic agreements have already been signed between Iran and BiH in the field of trade, banking, joint investments, transport and cooperation of chambers of commerce, adding that there are conditions for improving overall economic and trade relations.

“There are also numerous opportunities for the two countries in the field of economy, especially in the fields of energy, petrochemistry, agriculture and tourism. During the period of the pandemic, restrictions have been imposed for all countries. My associates and I at the Embassy of the Islamic Republic of Iran in Sarajevo are making efforts to develop trade and economic relations and cooperation between the private sector of the two countries, and we are also working on removing the existing obstacles,” Ghelichkhan added.

The development of bilateral relations, increasing tourist exchange from Iran and Bosnia and Herzegovina, joint investments and growing relations between businesses and industrialists, certainly require easier travel between the two capitals, noted the Iranian ambassador, adding that he hopes that by achieving the goals set for expanding cooperation, the preconditions for establishing a direct flight between Tehran and Sarajevo would be met.

Among the migrants who come to BiH illegally on their route to the EU are Iranian citizens as well. Asked how much can be done on their readmission, Ambassador Ghelichkhan said that the Constitution of the Islamic Republic of Iran says that the right to choose one’s place of residence is one of the basic rights of individuals.

These days, the anniversary of the victory of the Islamic Revolution is being marked in Iran, and this year, due to the observance of health protocols, there will be no National Day ceremony in the form of receptions as it has been usually one.

Iranian Ambassador to BiH Gholamreza Alimohammad Ghelichkhan invited all friends and those who love Iran to attend the virtual celebration of the National Day of Iran, which will be broadcast live on Tuesday, February 9, at 11.00 hrs. on the Facebook page of the Embassy of Iran @iranebih.

“Also, the Iran Culture Day program will be broadcast live on Tuesday, February 9, at 18.00 hrs., on the Facebook page of the Cultural Center of the Embassy @infoiran.ba, Ghelichkhan noted in an interview with FENA.