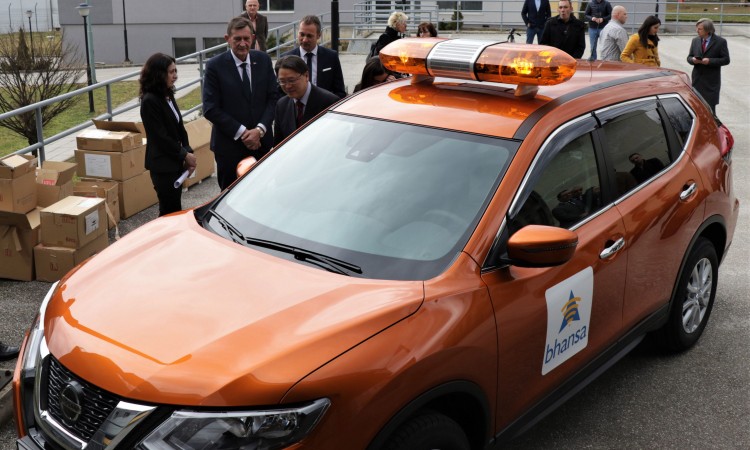 SARAJEVO, February 14 (FENA) – The Government of Japan has donated a special patrol vehicle and spare parts, which have been handed over today to the BiH Air Navigation Services Agency (BHANSA) through the BiH Ministry of Communications and Transport.

It is a special vehicle designed to maintain a weather observation system at the location of the Sarajevo Airport Approach Control Unit. Japanese Ambassador to BiH, Hideyuki Sakamoto handed over the vehicle to Minister of Communications and Transport of BiH Vojin Mitrović on behalf of the Government of Japan.

Expressing his gratitude to the Ambassador and the Government of Japan, Minister Mitrović recalled that during 2018, part of a grant was implemented in the form of a donation of meteorological equipment (model AMOS 5100), consisting of two automatic weather stations with a weather monitoring system installed at two locations – Sarajevo International Airport and at Bukovik, near Sarajevo.

According to Ambassador Sakamoto, the Government of Japan is donating this maintenance vehicle to assist BHANSA’s activities in facilitating connectivity and security of air transport, which also aids economic activity and mobility of citizens.

“Japan gives great importance to integration in cooperation initiative with the Western Balkans. The fact is that connectivity is the main bridge that connects people, societies, economies and countries in the future. I wish this vehicle to be used in BiH and to be remembered for a long time as one of the symbols of good bilateral relations between our two countries,” stated the Japanese Ambassador.

On behalf of the BiH Council of Ministers, Minister Mitrović handed the vehicle over to BHANSA Director Davorin Primorac, who said that the state of Japan and its people have always been true friends of BiH.

He also stressed how much this donation contributes to safety, both at Sarajevo Airport and in the entire BiH airspace, as it allows users of their services to be informed about flight weather, which is one of the key safety factors when providing air navigation services.