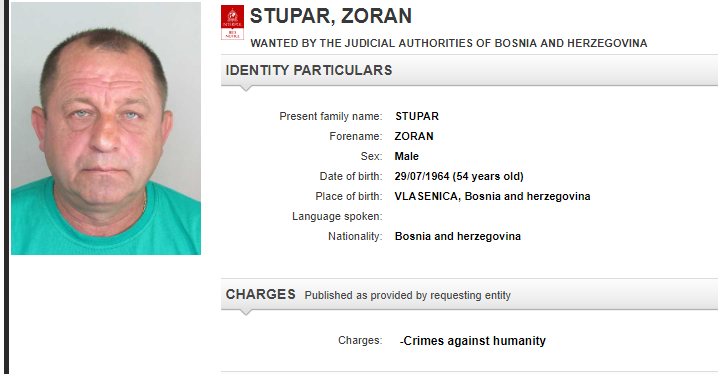 SARAJEVO, January 21 (FENA) – Interpol has issued a ‘red notice’ for the arrest of Zoran Stupar, one of four former Bosnian Serb fighters charged with crimes against humanity over attacks on Bosniak villages in the Vlasenica area of eastern Bosnia in 1992.

Interpol has issued a “red notice”, the closest mechanism to an international arrest warrant, for Zoran Stupar, a former member of the Public Security Station in Vlasenica in eastern Bosnia, after he failed to respond to court summons.

Stupar’s lawyer, Danilo Mrkaljević, said that his client was ordered into custody, but he did not know where he was or that a warrant was issued.

“I am his attorney, but I do not know where he is. I did not know that a warrant against him has been issued. I know he was ordered into custody,” Mrkaljević told BIRN.

In mid-November 2018 the Court of Bosnia and Herzegovina confirmed an indictment against Stupar and three others for crimes against humanity committed in the Vlasenica area, during the war in Bosnia, from April to September 1992.

He was charged along with Simo Stupar, Zoran and Goran Tešić, for having “personally and directly” participated in attacks on villages and other places inhabited by Bosniaks in Vlasenica municipality.

During these attacks, they are accused of involvement in the murders of at least 16 Bosniaks, the persecution of several dozen civilians, including minors, and of detaining people at the Sušica detention camp and the police Public Security Station in Vlasenica.

“Houses and other property owned by the Bosniak population were pillaged and set on fire [during the attacks],” the prosecution said in a statement when it initiated the charges.

According to the indictment, Simo and Zoran Stupar and Goran Tešić committed the crimes as police officers at the Public Security Station in Vlasenica, and Zoran Tešić did so as a Bosnian Serb Army soldier.