Inzko at UN Security Council: BiH has not formed government for 13 months 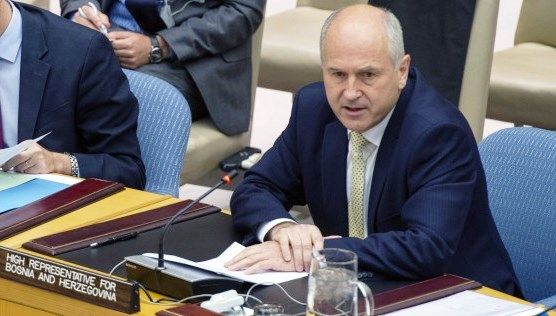 NEW YORK, November 5 (FENA) – Bosnia and Herzegovina has failed to form a new convocation of the BiH Council of Ministers, but neither did the Federation of BiH government 13 months after the General Elections, High Representative Valentin Inzko warned today in a report he presented to United Nations (UN) Security Council members.

In his address, the High Representative expressed regret that the government formation process has now stretched for over a year, adding that although the Council of Ministers from the previous mandate continues to function until the appointment of the new Council of Ministers, it remains hamstringed by the politically calculated and unnecessary blockade of the BiH Parliament.

“This means that no new legislation can be adopted, including the state-level budget, which severely limits the country’s ability to effectively deal with emerging issues, such as the migrant crisis,” Inzko said.

He recalled that the European Commission gave its opinion on the request for BiH membership in the European Union in May when it identified 14 key priorities that need to work.

The High Representative points out that there is consensus in BiH on its path to the European Union, but given that the state parliament is not functioning and it is the legislative body that should ensure the implementation of reforms and it is at a standstill.

The High Representative highlighted the continued divisive and destabilizing rhetoric that overwhelms the political climate. He added that some political leaders from the RS have continued to make statements expressing separatist tendencies or predicting the dissolution of BiH, while some Croat representatives seek a territorial rearrangement of the country.

“At the same time, the biggest Bosniak party has again adopted a party platform advocating the Republic of BiH, which was not helpful,” the High Representative said.

He also stressed that the glorification of convicted war criminals, which is still widespread, makes the possibility of a true and lasting reconciliation amongst all peoples much harder to attain.

Inzko also spoke about the formation of new police forces in Republika Srpska, which he claims was an alarm to the public in BiH, which is why he believes that the international community should strongly monitor the development of this situation.

Speaking about the BiH Constitutional Court ruling on Mostar and the ECHR ruling in the “Sejdić-Finci” case, which remain unimplemented 10 years on, the High Representative underlined that the “rule of law and the fight against corruption should be priorities for BiH, OHR stated.

The High Representatives also said that the most reprehensible issue is revisionism or outright denial of the Genocide in Srebrenica, which is a legal fact as confirmed in judgments of both international and domestic judicial bodies, including the ICTY – a body established by the UN Security Council.

The High Representative also took the opportunity to call on the international community to “continue to work in unity to preserve the achievements of the past two decades and, above all, deliver on the promise of a better future for the citizens of BiH.