Home BiH Izetbegović: This was year when the constitutional order of BiH was defended

Izetbegović: This was year when the constitutional order of BiH was defended 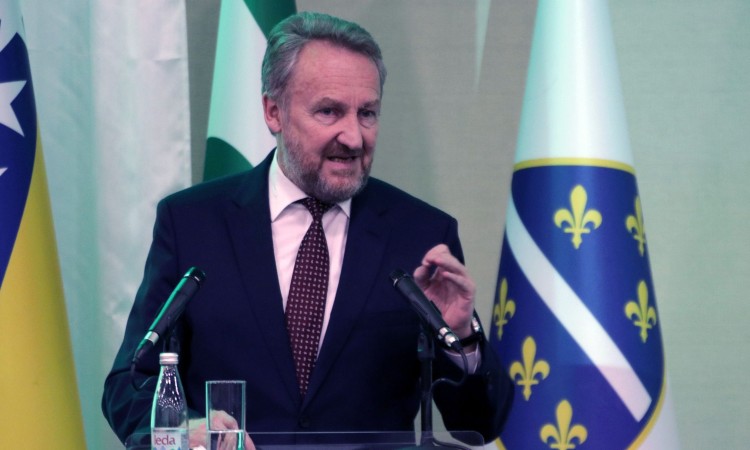 SARAJEVO, December 30 (FENA) – President of the Party of Democratic Action (SDA) Bakir Izetbegović said at a New Year’s press conference that 2019 was a year of deadlock, crisis and blockade.

“At the end of 2019, we are in positions that we should have secured at the very beginning of the year, in January. We have gone all the way round and went back to the beginning. However, we did not go that way for no reason, nor in 2019 we wasted time. This was the year in which the constitutional order of Bosnia and Herzegovina was defended, the rule of law was defended, the strategic goals of BiH’s integration into the European Union and NATO were defended,” said Izetbegović.

He added that the basic democratic principle of respecting the will of voters in forming post-election coalitions was also defended. All of the above was attacked and questioned. SDA President said that we are back to the point where we were at the beginning of 2019, but this time we set things and relations the right way, reset the settings, put them back on track.

According to him, there were various attacks on BiH, on its institutions, on the truth about its past, but at the heart of all these attacks was an attempt to impose the will of entities on state.

Izetbegović noted that throughout 2019, we have witnessed the most direct and dangerous attacks on BiH’s stability and sovereignty since the signing of the Dayton Agreement. We opposed the creation of a patriotic political bloc based on the presidential duo Džaferović-Komšić from the beginning, and intensive cooperation with representatives of the international community.

He added that decisive reactions to the RS National Assemby Declaration, a clear report by the High Representative to the UN Security Council, detailing who is causing problems in BiH, and his statement that he is considering imposing a law against genocide bring hope that PIC and OHR will be more specific in the future and do the work to which they are bound by Annex 10 of the Dayton Peace Agreement.

“The EU Mission to BiH and the ambassadors of countries of Quinta, led by the US Ambassador, have given us the most concrete support, and have helped in finding solutions for relations and cooperation between BiH and NATO. The agreement, signed by Dragan Čović, Milorad Dodik and me, with the mediation of the EU ambassadors on August 5, defined the priorities of the future Council of Ministers, and sought a solution for BiH’s relationship with NATO. The principle of respect and implementation of relevant laws and strategies regarding integration processes – EU and NATO – has been accepted. Therefore, the principle of the rule of law in BiH is confirmed. Negotiations in the BiH Presidency, based on these principles and with the presence and mediation of representatives of the countries of Quinta, continued in the next few months and came up with a solution acceptable to all parties,” said the SDA President.

When it comes to political strife that sparked a year-round crisis and blockade, Izetbegović says that positions of Serb and Bosniak-Bosnian politicians were clear, and “the position of the HDZ and the HNS was ambivalent.”

He added that HDZ strongly supported NATO and the European path of BiH, “but did not oppose the SNSD when trying to stop that path and break European principles and standards in functioning of the state of BiH.”

“HDZ was firm from the beginning that nothing should be conditional on the formation of a government, but this only applied to the state level of government, where it was appropriate for the SNSD. The HDZ BiH has been blocking the formation of a new government structure at the Federation of BiH level for 14 months and has conditioned it by adopting amendments to the Election Law following their model. Throughout 2019, the SDA has persistently called on Croatian partners to stop unjustifiably binding the establishment of the FBiH level of government with changes to a law that falls under the jurisdiction of the state parliament. I will say it again today – blocking and ignoring the will of voters is an unacceptable thing and continuing this relation will not be helpful in finding a solution. We need to relax our relations a bit, to establish trust, not ultimatums,” Izetbegović emphasized.

He noted that the HDZ “should accept the existence of civilian-minded Bosnians, stop trying to push them into a Bosniak quota, and improve relations with their representatives.”

“This is the only way, we live together and we should not pretend not to see each other,” stated the SDA leader.

Izetbegović stressed that “it is time for elections to take place in Mostar, and the SDA is ready to participate in intensive negotiations on this topic”.

“SDA is not ready to force Mostar Bosniaks to accept solutions that are not good for them. There was enough coercion against these people. Their city has been demolished, their bridge has been demolished, their political position has been degraded, destroyed by the abolition of municipalities and the position of mayor. Representatives of the international community have done this degradation, so we expect their stronger engagement,” said Izetbegović.

In 2020, we can achieve the status of a candidate for EU membership if we complete the formation of the legislative and executive power, i.e. the level of the Federation of BiH, create preconditions for holding elections in Mostar and develop a national program for the adoption of the EU acquis. The start of the negotiations will be harder to achieve, but all efforts we make to meet the conditions defined through the 14 priorities relating to democracy, the rule of law and public administration reform will have a direct impact on improving the daily lives of citizens, the SDA president said.

He stressed that the Federation also carried the burden of the migrant crisis, which created special pressure on Bihać and Hadžići. Alternative locations are provided for the accommodation and safe stay of migrants before the winter has started. This problem has been treated by everyone else as exclusively problem of the Federation of BiH and Bosniaks.

He also referred to “the most difficult problem to solve in BiH, but also in the entire region – the departure of young, educated people.”

“The numbers are unfortunately depressing. According to official Eurostat data, based on the number of work permits issued to BiH citizens in 32 countries in Europe, 228,230 have established employment in those countries over the last ten years. These data ranged from 10 to 20 thousand in the first years, exceeding 50,000 in 2018 and 2019.

“Each year, a small town emigrates from BiH. The saddest fact is that a town of young, vital people from BiH emigrates. The funds that society invests in one educated person in different ways amount to tens of thousands of KM, so that poor BiH supports developed economies of European countries with billions of euros. This is a benefit for European countries. The damage to BiH is far greater, hardly recoverable,” Izetbegović said.

He said that “in the next eight to ten years, we have the opportunity to implement reforms that await us on the path of integration into the European Union and NATO, thereby making BiH a stable and prosperous country, building a modern transport and energy infrastructure, significantly increasing the number of employees and level of standard of living”.

“When we do this, the return of people to Bosnia and Herzegovina will start. In the next year, we need to make the first major step in this direction,” Izetbegović said during his address at the New Year’s press conference.