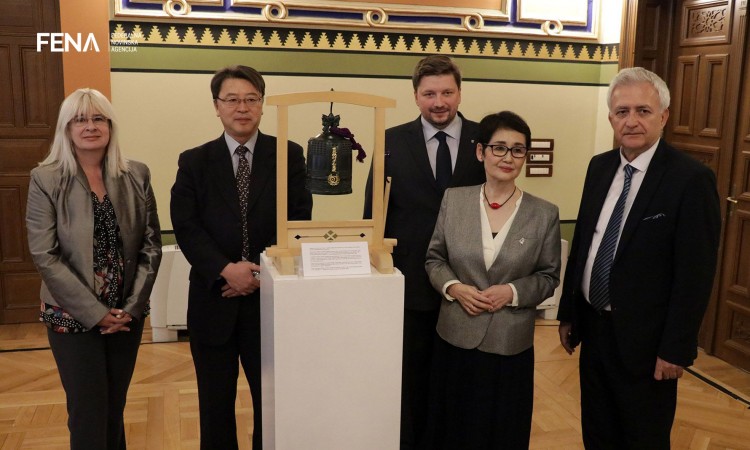 SARAJEVO, April 12 (FENA) – Today, Sarajevo received a gift from Japan, the Peace Bell as a symbol of peace of the United Nations, this the city joined the family of the world cities to whom this symbol of peace and appreciation has been given, which is another token of successful and friendly relations between Sarajevo and Hiroshima and Bosnia and Herzegovina and Japan.

At the ceremony at the City Hall, Deputy Mayor Milan Trivić received the Peace Bell from Seiko Takase from Tokyo, daughter of Chiyoji Nakagawa, the man who established this symbol and whose original work stands in front of the United Nations headquarters in New York.

Takase told the guests today at the ceremony that her father was a participant in World War II, but also in the previous Sino-Japanese armed conflict.

He led his army that managed to survive the first of those conflicts, but in the second one, in the battlefield in Burma, all his fellow soldiers were killed and he was wounded.

The inspiration to create this universal symbol of peace came to him when he heard the ringing sounds from a Burmese temple as he was drifting in and out of conscience as a wounded man.

Takase said she had a huge desire to give this Bell of Peace to Sarajevo as a suffering and surviving city.

Deputy Mayor of Sarajevo, Milan Trivić, stressing that her father’s idea has become an official symbol of peace in the UN, said that he sees the symbolism of universal values ​​important for the future and survival of the human species.

“I believe that your father’s idea will live in Sarajevo as a metaphor of the world and will contribute to a higher level of civilization in the 21st century, when wars would be obsolete and peace would be everlasting,” Trivić said addressing the daughter of the founder of the Peace Bell.

Ambassador of Japan to BiH Hideyuki Sakamoto also attended the ceremony wanting to highlight the continuing of good cooperation of his country and Bosnia and Herzegovina.

The Japanese Peace Bell tolls during the spring equinox in March, on the day of the opening of the UN General Assembly in September and on the International Peace Day on September 21.