Home BiH Kafedžić: All public procurements will be monitored closely

Kafedžić: All public procurements will be monitored closely 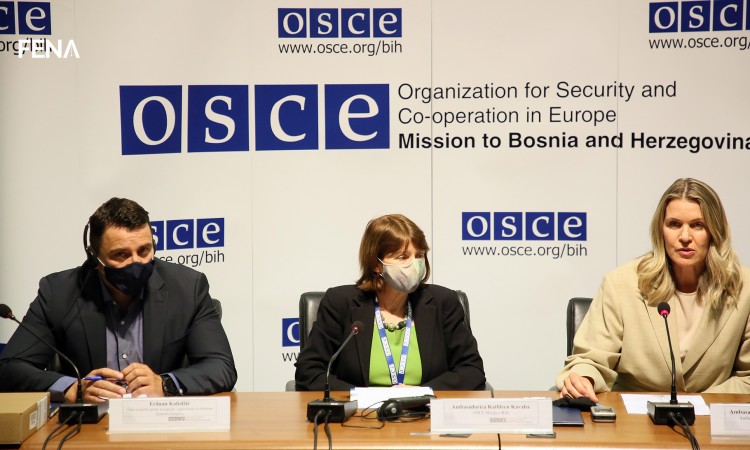 SARAJEVO, June 4 (FENA) – The Office for Fight against Corruption and Quality Management of the Sarajevo Canton and the OSCE Mission to Bosnia and Herzegovina presented the Public Procurement Register in the Sarajevo Canton today, which is characterized as another step towards ensuring transparent spending of public funds in the SC and building citizens’ trust in the cantonal institutions.

The Head of the OSCE Mission, Kathleen Kavalec, supported the Office’s activities as an example for other institutions in BiH, in the fight against corruption.

As she said, the OSCE Mission to BiH will remain committed to the work of the Office, which has developed several databases in the public interest for the sake of transparency and in order to establish integrity in the public sector.

“The new public procurement database will enhance transparency in this area and lead to the detection of irregularities in the process. This is important because the procurement process is prone to corruption. In 2020, public institutions and companies in the Sarajevo Canton performed about 10,000 public procurement procedures and it is important to ensure responsible spending of public funds in the interest of all citizens. In particular, insufficient supervision during the pandemic opened space for corrupt practices,” said Kavalec at the press conference.

Swedish Ambassador to BiH Johanna Strömquist said that public servants must be responsible in spending public money, which is money that belongs to the citizens.

“Corruption is an obstacle to reforms and progress in BiH. Corruption undermines citizens’ trust in institutions, but also democracy itself, and discourages serious investors. The fight against corruption is the key to the progress of society, and it is one of the 14 priorities of the EU for BiH to become a candidate,” said the Ambassador of Sweden, the country that chairs the OSCE in 2021.

The Head of the Anti-Corruption Office, Erduan Kafedžić, said the office, with the help of the OSCE, has developed the strongest information system in the region when it comes to fighting corruption.

As he said, so far the Office developed seven registers, including registers on the property of appointed persons, employees in the public sector, transfers, incentives in agriculture, incentives to the economy … He said that the SC has realized about 5,000 public procurements so far this year.

As he said, in 2021, the Health Insurance Institute of the SC dominated when it comes to public procurement.

“In 2021, direct agreements dominated in the canton. So far, 1,504 business entities have been identified, working with the SC authorities. Through this register, it is possible to establish who these persons are within the institutions and whether they can be connected to political parties. When the Office finds irregularities (and several have already been identified) and performs analysis, it goes to the Public Procurement Agency, which can impose misdemeanor sanctions. If it is a criminal act, we are going to the competent police administration and the SC Prosecutor’s Office,” Kafedžić explained.

The OSCE Mission to BiH donated the equipment needed to digitize the public database. It was pointed out that this is a strong message to the authorities that the fight against corruption has the support of the international community.