Home BiH Kavalec and Strömquist: Increase representation of women in all spheres of society

Kavalec and Strömquist: Increase representation of women in all spheres of society 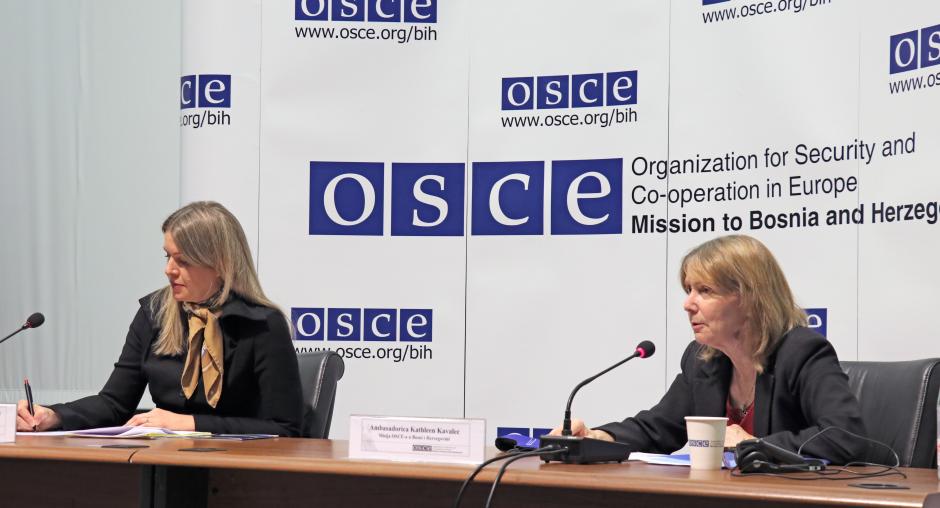 SARAJEVO, March 7 (FENA) – Only when women and men enjoy equal rights, equal level of representation and have equal access to resources, can societies develop in a peaceful, sustainable, and prosperous manner, wrote Head of the OSCE Mission to BiH Kathleen Kavalec and Swedish Ambassador to BiH Johanna Strömquist in an op-ed on the occasion of March 8, International Women’s Day.

They stressed that right now, we are facing not only one but two global crises – the pandemic and the climate crisis.

“Clearly, we need all the talent that exists to take us out of this situation and to create a better future for everyone. To exclude half of the population in this quest does not make sense. Therefore, the goal must be to increase the representation of women at all levels and all spheres of society. We must make sure that we get the best and brightest among the whole population involved and not only half of it,” they said.

Through their work and contacts with people, they know that women who seek important roles in politics, business, academia, journalism, or other civic roles in Bosnia and Herzegovina (BiH) face numerous challenges.

They explained that the recent municipal elections in BiH once again demonstrated the degree to which women are under-represented in politics, as it is also for other key leadership roles in this country.

“The impediments that prevent women from fuller engagement in public life are tenacious, but so is the determination among women to change this dynamic. Today, on International Women’s Day, we the OSCE Mission on BiH and the Embassy of Sweden in Sarajevo, representing the OSCE Chairpersonship 2021, would like to give our support to a much-needed discussion about the prevalence of and damage caused by malicious attacks and harassment of women in the public sphere. Silencing, intimidating and abusing women who seek to participate in public life is devastating not just for those targeted, but for all society,” stated the Ambassadors.

The deliberate spread of malicious disinformation intended to discredit or intimidate public figures – women or men – must be recognized as a security threat, not “just a women’s issue”. Such attacks undermine public safety, weaken public trust in institutions, and increase the vulnerability of the state. Those are attacks on democracy negatively affecting everyone’s security.

“Harassment, in particular sexual harassment, takes many forms – from unwelcome touching, hugging or kissing, sexually suggestive comments or jokes, to intrusive questions or spreading disinformation about a woman’s private life and political views. The OSCE’s Survey on Well Being and Safety of Women found that almost three out of ten women in BiH have experienced at least one form of sexual harassment. Of this number, only 3% reported it to the police,” it is stated in their op-ed.

“A look at public life in BiH reveals a consistent pattern of gender-based attacks on women politicians and public servants. As women launch and advance in their careers, they encounter various forms of harassment at work and in the public sphere.  Many have at one time or another been the targets of personal attacks for daring to strive for positions traditionally held by men. They must contend with patriarchal family roles, an educational system that perpetuates antiquated gender norms, and male-dominated political and economic systems. In our time in BiH, we have witnessed many women bravely step forward into public life, but sadly we have also seen countless personal attacks on women,” they said.

Kavalec and Strömquist reminded that at a recent event organized by the OSCE Mission to BiH and the Embassy of Sweden, participants discussed the ways in which harassers target women and their public engagement.

“Attackers criticize women’s sexuality, behaviour and roles as mothers and wives, relying on social media to circulate false and malicious narratives about their personal lives and political views, implicitly or explicitly inviting others to join in and amplify the attacks, often to the point of endangering the personal safety of the women targeted.  The use of lies and disinformation suggests an attempt to discredit women and force them back into traditional roles,” stated the Ambassadors.

When women object publicly to harassment, they are often met with disbelief or even more harassment, in an effort to silence them.  Women and girls are advised to “tone it down”, “be nicer,” or withdraw from the situation, the same strategies used to discourage women from playing a larger role in the public sphere.

They stressed that in recent weeks we have seen a strong public reaction to this situation.

“Women in the Balkans have courageously begun to share their experiences of gender-based violence and harassment through the Nisam tražila movement. This movement builds on decades of work by women’s rights and human rights organizations and activists. Their hard work has brought us to this moment when women feel free to speak up, joining forces and bringing a long-standing problem to the surface,” they stated.

Head of the OSCE in BiH and Swedish Ambassador to BiH hope that the momentum of this movement will be used to implement the changes that earlier generations have paved the way for.

“There is still much work to be done to properly tackle the culture of harassment in BiH. Political parties should offer their full support to women and girls seeking to play a role in public life. Law enforcement and the judiciary must strive for full compliance with the Law on Gender Equality and investigate and prosecute officials who use defamatory or sexist speech, spread disinformation or endanger anyone’s personal security,” they wrote.

Changing attitudes and old habits is challenging, but not impossible. BiH has already adopted the legislation and policies needed to combat harassment; what is needed now is implementation and political support.  With this, change is possible.

“Meanwhile, we can all help by demonstrating solidarity with the brave women who have chosen to speak out and to stand up against any kind of gender-based violence, harassment or attack when we see them.  It is important to listen to the experiences of others and to work together – women and men – to create a better and safer future for all. To all the women in BiH, the region, and across the globe, we wish you a safe and strong 8 of March,” Head of the OSCE Mission to BiH, Kathleen Kavalec, and Swedish Ambassador to BiH, Johanna Strömquist, pointed out in their op-ed on the occasion of March 8, International Women’s Day, the OSCE announced.