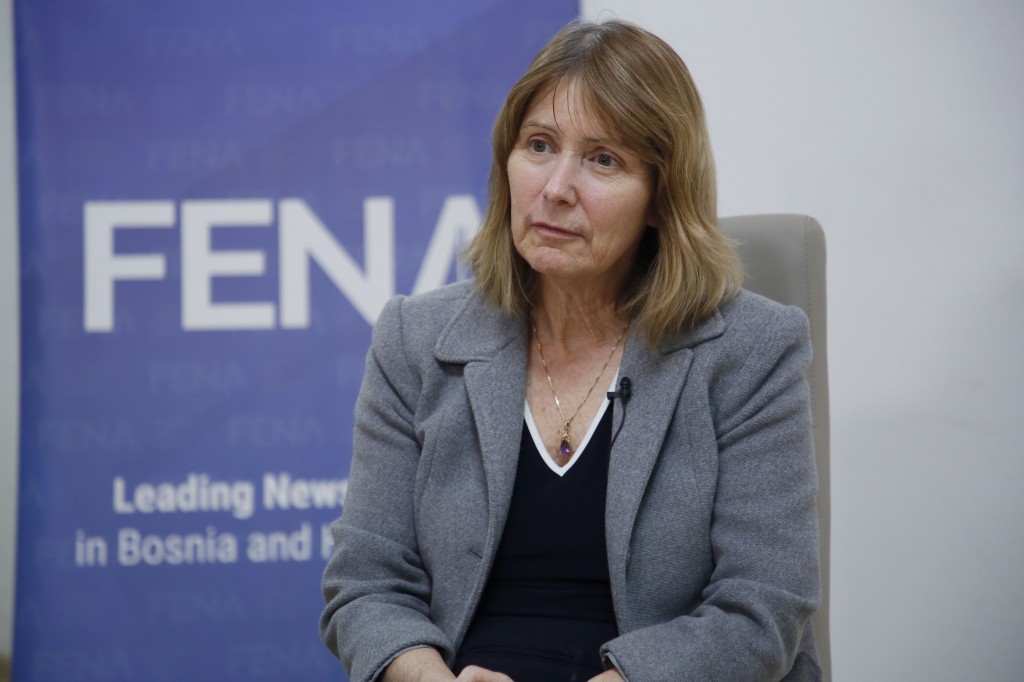 SARAJEVO, December 12 (FENA) – The current political situation in Bosnia and Herzegovina is not only difficult but also very worrying, which was one of the reasons for the recent visit of the OSCE Secretary-General Helga Marie Schmid and other international officials, said in an interview with FENA the Head of the OSCE Mission to BiH Kathleen Kavalec.

As she emphasized, the increase and frequent use of nationalist and inflammatory rhetoric goes against BiH’s interests in achieving the set goals, and if you think about it, she added, the coronavirus pandemic is not the only pandemic currently present.

“We are witnessing the growing use of nationalist, divisive and inflammatory rhetoric and we may need vaccinations against such behavior. In the two years I have been here, I have heard from the citizens that they are very disappointed with the fact that the figures who hold public office are not focused on solving concrete problems of citizens,” Kavalec underlined.

She noted that she has witnessed an astonishing amount of cynicism in some politicians who are so focused on their narrow political interests, instead of focusing on specific problems.

“For example, why BiH citizens do not have access to a QR code to prove that they have been vaccinated and which would allow them to travel freely to Europe, why political leaders cannot agree on something so simple that would improve the living situation of all citizens of this country?” asked Kavalec.

She also singled out the example of “the inability of the Presidency of BiH to agree on the engagement of assets of the Armed Forces of BiH in order to respond to natural disasters such as fires, landslides or floods and thus help the citizens.”

Also, she added, the Presidency of BiH cannot reach an agreement for the state to be included in the next round of PISA research in order to assess the quality of the education system and improve the quality of education for all children in BiH.

These are just some of the topics on which citizens agree that politicians should focus, says the Head of the OSCE Mission to BiH, because that is why they pay taxes and public money should be spent on what is a public good, not on rising tensions and political conflicts.

These are exactly the things that the OSCE advocates and calls for the return of the full functionality of state institutions in order to work for the benefit of the citizens who actually finance these institutions through the payment of taxes.

She reminded that during her visit to BiH, Secretary-General Schmid called for dialogue, talks and reconciliation, as well as the removal of inflammatory rhetoric of divisions, and to return the focus to solving specific problems such as work to eliminate corruption.

The International Anti-Corruption Day was marked on December 9, and it was an opportunity to point out the importance of the fight against this phenomenon, and this is an area in which the OSCE is quite active.

During her visit to BiH, Schmid stressed the need for inclusive education, improving education in general and ensuring access to education for all, but also pointed out the need to preserve peace and stability.

The Head of the OSCE Mission to BiH, Kathleen Kavalec, also referred to the ongoing talks on changes to the election legislation that have intensified in recent months, recalling that the Mission’s focus has been on improving the integrity of the election process in BiH.

“Unfortunately, we see that citizens are losing confidence in the election process, which is the foundation of democracy. So, together with the ODIHR (Office for Democratic Institutions at the OSCE), which monitored the election process in the past four cycles, we presented a set of serious recommendations to improve the integrity, quality and transparency of elections in BiH,” she said.

These proposals were also presented to the Central Election Commission (CEC), the Interdepartmental Working Group for Amendments to the Election Law of the BiH Parliamentary Assembly, and the OSCE is at the disposal of all legislators interested in adopting and implementing these amendments.

Kavalec says that these are not changes that are difficult to implement because they are in line with international practice, but the only question is whether there is enough will to adopt them and reach an agreement between political parties that this would be the best for BiH’s future.

She thanked the European Union and the United States for intensifying talks on this issue and expressed hope that they would bear fruit.

Kavalec also says that the fear that an agreement on changes to the election legislation will not be reached is becoming justified, but the fact that an agreement was reached on the issue of the City of Mostar, in which it was not possible to organize elections for 12 years, gives us hope.

“This shows that change is possible, that an agreement is possible, and from our point of view, the election process should be comprehensive in order to be successful, which is why we advocated that representatives of all political parties be included in it,” said Kavalec.

An agreement is possible, she says, but it will take a  lot of will to reach a compromise and a willingness to take risks. She is aware that many BiH politicians are reluctant to take risks, but working for the benefit of citizens is always a good direction to take.

In the meantime, the OSCE will work with the CEC BiH and help with other reforms that do not involve changes in the law, which could improve the integrity of the election process. A project is currently being implemented to enable electronic registration of voters, political parties and polling stations.

“These are very practical and logical changes that can improve the election process. We are also working with prosecutors and with election officials in order to improve the processing of election fraud,” Kavalec explained.

All these changes do not require amending the law, but the best solution would be to see a comprehensive electoral reform that would be agreed between representatives of all political parties, concluded the Head of the OSCE Mission to BiH Kathleen Kavalec in an interview with FENA.