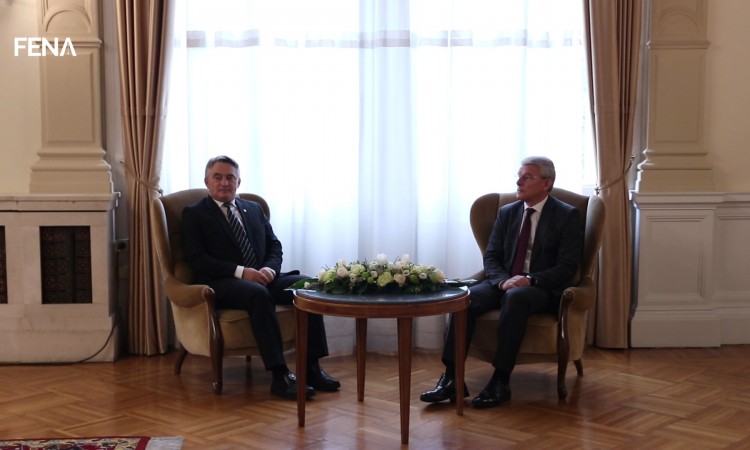 SARAJEVO, November 24 (FENA) – Members of the Presidency of Bosnia and Herzegovina Željko Komšić and Šefik Džaferović extended a joint congratulation to the citizens of BiH on the occasion of November 25 – BiH Statehood Day and said that everyone should turn to positive and constructive processes, further internal reintegration, economic development and integration into the European Union and NATO.

The Presidency member Željko Komšić reminded that seventy-seven years ago, thanks to a strong and determined generation of people, the statehood of BiH was restored in Mrkonjić Grad and that the most advanced parts of the society at that time were supported by the libertarian aspirations of the majority of BiH citizens, workers, peasants, intellectuals and others.

They did so, Komšić added, on the principles of democracy and freedom for all citizens and peoples of Bosnia and Herzegovina, regardless of their ethnicity or religion.

He pointed out that the leaders of the then national liberation and anti-fascist struggle had enough wisdom and knowledge to mobilize people of different political and ideological worldviews in the fight for the state and their freedom.

“People of different identities and members of different social or class groups were united over one, common goal. They succeeded in that because they respected each other and knew how to define a common interest,” said Komšić.

He added that the then generation of anti-fascists in BiH did not lag behind those who fought against fascism and evil in the world, and that the sacrifices they made testify and will forever witness their civilizational feat achieved back then to the pride of all.

“We can still learn lessons from that civilizational feat. The future of BiH is not in ethnic, political or ideological divisions. If we want to be part of the modern, civilized, advanced part of the world again, we will have to respect each other more. We will have to give up narrow political party interests in order to preserve the state for which so many people sacrificed their lives,” Komšić underlined.

He expressed the belief that this could be done and that the generation of people from 1943 did not lose hope even in much more difficult circumstances.

“Even today, precisely because of the victims who gave their lives for this country, we have no right to lose hope in our homeland, the state of equal citizens and peoples,” said Komšić.

He is convinced that Bosnia and Herzegovina, despite all the aggravating circumstances it is facing, is moving in the right direction, and that is membership in NATO and the European Union, which will surely bring a more stable, honest and prosperous society.

“Those who do not think well for our country will not stop us on that path. They may try, but they will not succeed. The majority of BiH citizens believe that this is the right path to take because they know where they belong and where their homeland belongs.

If we persevere on that path as a generation of Bosnians and Herzegovinians from the period of the national liberation struggle, success will certainly not be lacking,” concluded Komšić in his address.

The BiH Presidency member Džaferović pointed out that November 25 is a special date that symbolizes all the highest values.

He emphasized that the historic session of ZAVNOBiH on November 25, 1943 in Mrkonjić Grad, was a place where a decision was made to restore the statehood of Bosnia and Herzegovina and its multiethnic character and equality of all its peoples and citizens was confirmed on that day.

“On the foundations of the anti-fascist struggle, half a century later, in the difficult circumstances of aggression, Bosnia and Herzegovina fought for its independence and became an internationally recognized state, a full member of the United Nations,” said Džaferović.

He reminded that a few days ago, the 25th anniversary of the Dayton Peace Agreement was marked.

“Equality proclaimed at ZAVNOBIH was also confirmed by the Dayton Constitution of BiH, according to which peoples and citizens should be equal on the entire territory of the state. Unfortunately, this principle has not been implemented and we still have strong discrimination, especially when it comes to the returnee population and national minorities,” said Džaferović.

He stressed the need to ensure equality for every person, on every inch of this country.

Džaferović underlined that disturbing ideologies and policies of divisions must be overcome because BiH citizens from all ethnicities do not want to live in a society where tensions are constantly being generated.

“We need to turn to positive and constructive processes, further internal reintegration of our country, its economic development and integration into the European Union and NATO. This is in the interest of all peoples and citizens of BiH, and I believe that this period lies ahead,” concluded a member of the Presidency of BiH Šefik Džaferović.