Korčok: Slovakia continues to support BiH on its European path 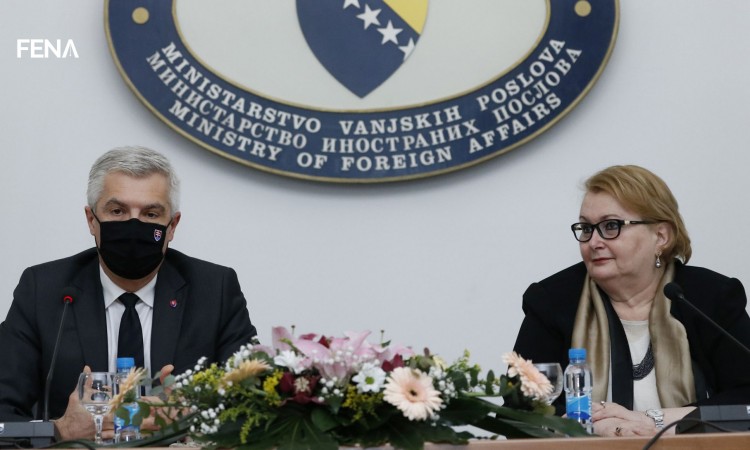 SARAJEVO, February 9 (FENA) – Minister of Foreign and European Affairs of the Slovak Republic Ivan Korčok stated today in Sarajevo that his country will continue to support Bosnia and Herzegovina and the countries of the Western Balkans on their path to integration into the European Union (EU).

“Although this is your choice and interest, it is also our interest, the EU’s interest for Bosnia and Herzegovina to join the family of European countries,” said Minister Korčok after a meeting with Deputy Chair of the Council of Ministers and BiH Foreign Minister Bisera Turković.

He underlined that all the necessary conditions on that road must be met and that “there are no shortcuts or ways to get around them”.

In that context, he referred to 14 key priorities from the Opinion of the European Commission, and called for stronger and more efficient engagement in the reform process, which he said were in the interest of security, well-being and prosperity of BiH citizens.

Minister Korčok reminded that Slovakia has been engaged in supporting stability in the region for a long time, as a condition for the stability of Europe, and announced that his country would increase the share of its own forces within EUFOR, i.e. Operation Althea.

Welcoming the guest, Minister Turković said that the Minister is an official who understands Bosnia and Herzegovina and the region of the Western Balkans.

“We openly discussed many issues that are important and of interest to our two countries,” said Turković, adding that bilateral cooperation is very successful and that there are no open issues and that it is a good foundation for the development of further comprehensive cooperation.

She stressed that, regardless of the current situation burdened by the Covid-19 pandemic, it is necessary to work on intensifying cooperation, including promoting the investment potential of the two countries.

At the same time, Turković expressed gratitude for the assistance provided by the Slovak Republic to Bosnia and Herzegovina in various segments.

The interlocutors also exchanged views on a number of other issues, including BiH’s Euro-Atlantic path and the ‘Reform Program’ 14 priorities from the European Commission’s Opinion, and the issue of migration.

The visit of the Slovak Minister of Foreign and European Affairs Ivan Korčok to Bosnia and Herzegovina was organized as part of his first diplomatic tour to the Western Balkans.