Home BiH Košarac: The policy of BiH Council of Ministers is to protect domestic production

Košarac: The policy of BiH Council of Ministers is to protect domestic production 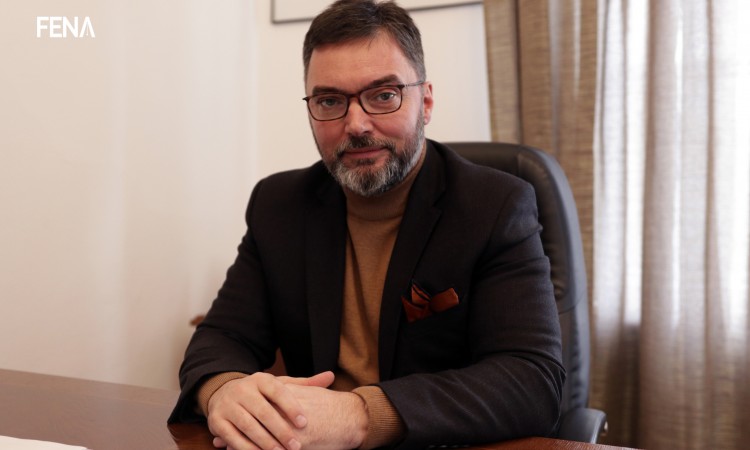 SARAJEVO, January 31 (FENA) – Minister of Foreign Trade and Economic Relations of Bosnia and Herzegovina Staša Košarac said it is important to discuss citizens’ problems in the institutions, emphasizing that no one can ignore ordinary people but everyone is aware that there are problems caused by the coronavirus pandemic.

In an interview with FENA, he reminded that the Ministry was very active in cooperation with the Veterinary Agency and other agencies at the beginning of the pandemic when it was important to define a list of important products for Bosnia and Herzegovina and ensure that foreign trade works smoothly.

“BiH has shown a high level of developed awareness in that unusual period through international institutions and the state based on the coordination of entity ministries to be very proactive to protect foreign trade of every farmer and there were no delays,” said Košarac.

On the other hand, he adds, the Ministry has done its best and made additional efforts to submit the Questionnaire for the export of red meat to EU countries, estimating that the market is much larger and that BiH businessmen have larger chances to make serious contracts and deals.

Before that, BiH businessmen had only contracted meat exports to Turkey, and it was necessary to encourage them to conduct foreign trade with the Russian Federation, China and European Union countries.

Progress is visible when it comes to exports from Bosnia and Herzegovina, and Košarac singled out the fact that much more fish was exported last year, about eight percent more than in 2019. Also, 7.3 percent more quantities of fruits and vegetables were exported, as well as beef and pork than before.

The Minister understands that businessmen now have a problem due to the fact that purchasing power of citizens has been reduced, and it is evident that there are surpluses in some branches, so there is a clear concern of agricultural producers what to do with products that may fail or fall in price.

He says that his wish is to coordinate certain trends not only in foreign trade but also in some other very important development policies in the field of agriculture.

“I’m sorry it wasn’t understood in the best way. When I directed them to the entity ministries, they thought that we did not want to deal with that, but I reject such claims. The policy of this convocation of the Council of Ministers of BiH is to protect domestic production,” said Košarac.

He says that Chairman of the BiH Council of Ministers, Zoran Tegeltija, organized meetings with representatives of the BiH business community regarding Covid-19, and emphasized the intention to create a working group for the protection of domestic production.

The export of pears to the Russian Federation is currently stopped after the Federal Service for Veterinary and Phytosanitary Supervision in Russia – Rosselkhoznadzor warned that they found a quarantine bacterial disease in imported pears from BiH, which causes their rot.

Košarac notes that the export of fruits and vegetables and meat is a sensitive business, given that BiH technologies must adapt to the standards of countries with which foreign trade is carried out.

BiH had similar problems in 2016 when the Ministry of Foreign Trade and Economic Relations was late in submitting certain data and information to the competent bodies of the Russian Federation, and in 2018 a similar problem occurred.

“We also had a problem with apples when we received information that the apple was not produced in BiH but was imported and as such sold to Russia. This is worrying and it is necessary to stop such practices, and those legal entities that think that they are conducting foreign trade in such a way must be sanctioned,” says Košarac.

Košarac expressed his belief, given that the reaction was very quick, that the issue would be resolved and it was established how this type of bacteria appears in the production itself.

“BiH is very close to getting the consent for the export of fish to the Russian Federation. We did not give up, but due to restrictions caused by the pandemic, we are slowed down with further efforts to continue advocating the export of dairy products, milk and meat to Russia, appreciating the capacity of this very important market for BiH,” added Košarac.

Since it was announced that an agricultural census will be carried out in Bosnia and Herzegovina, which has not been done since the 1960s, to know what capacities BiH has in that area, Minister Košarac estimates that this work should be completed by 2023.

Given that there is potential for the development of agricultural production in BiH, it was discussed what is the best possible way to do so, bearing in mind that there are certain conditions imposed by the European Union, because it is important to implement the foreign policy goal, and that is for BiH to become a full member of the EU.

According to the information he has, it is necessary to comply with EUROSTAT standards. The Agency for Statistics of BiH should submit information to the Council of Ministers of BiH, which should initiate legal procedures to start preparations for the organization of the agricultural census.

“This would be a good basis for the competent entity bodies that create policies in agricultural development to know what we have, but also to analyze the list of incentives that were in the previous period and to be able to create future strategic planning and development programs of certain branches in agriculture,” the Minister notes.

Therefore, it is necessary to see how to have adequate statistics, certain trends and how the competent authorities can distribute a certain type of funds for development through the implementation of budget funds for agriculture in the entities.

“We no longer need lump sum estimates or a set of wishes, we need exact statistical data based on which we would have a strategic approach to the development of this area,” concluded in an interview with FENA Minister of Foreign Trade and Economic Relations of BiH Staša Košarac.