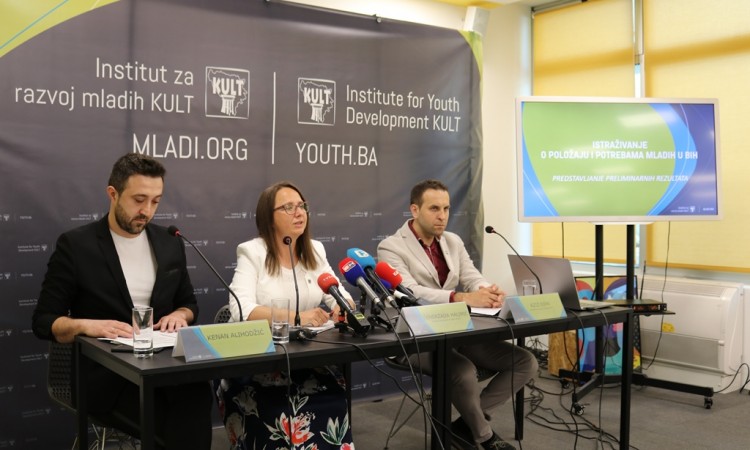 SARAJEVO, June 17 (FENA) – The Institute for Youth Development KULT announced today the results of a survey on the position of young people in Bosnia and Herzegovina, which, among other things, showed that the desire to leave the country is still high since more than 50 percent of young people said they wanted to leave BiH.

This is the first survey in 13 years when the first and only comprehensive survey on youth and youth sector in BiH was conducted, and its official results will be published in late July.

According to the 2013 census, there are 773,850 young people aged 15 to 30 living in Bosnia and Herzegovina, which means that 21.91 percent of the population is young, and the field of youth research is quite complex and requires insight into all spheres of society.

“The research process was conducted with the application of the strictest methodological standards and can benefit everyone, including decision makers in creating concrete measures aimed at improving the position of young people in BiH,” said Executive Director of the Institute for Youth Development KULT Šeherzada Halimić.

The research showed that young people believe that the priorities of the BiH authorities in the next five years should be employment and education, followed by health care, security and migration management in the context of the departure of the population from our country.

Preliminary results show that more than 65 percent of young people live with their parents/guardians, and that there is still a high interest in leaving Bosnia and Herzegovina, and youth unemployment is still estimated to be high in relation to the working population.

It is very concerning that 40 percent of the young people surveyed said that a member of their immediate family had left BiH in the last seven years, and that departures most often took place in suburban areas.

Also, the results show that more than 50 percent of respondents have an interest in leaving BiH, while 12.1 percent have already taken concrete steps in that direction.