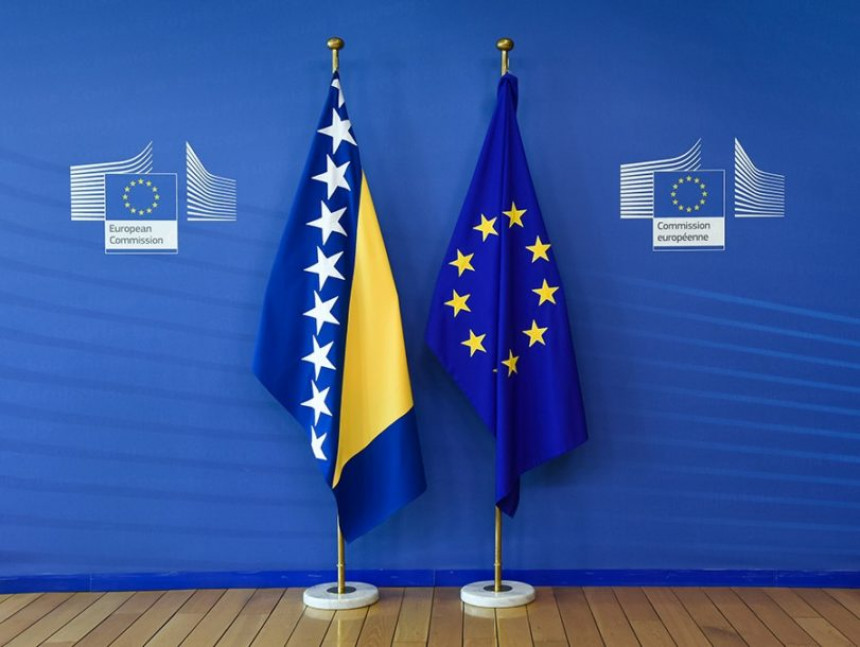 SARAJEVO, February 1 (FENA) – One of the most important priorities for Bosnia and Herzegovina’s accession to the European Union is progress in the segment of rule of law, and especially the ability of the judiciary to show concrete results in fighting corruption and organized crime, underlined the EU Delegation to BiH.

Bosnia and Herzegovina is at an early stage, i.e. at a certain level of preparedness in the prevention of the fight against corruption and organized crime. There has been no progress in implementing the key priorities of the Opinion, the 2019 recommendations in this area, and the findings of the Expert Report on the Rule of Law in BiH. Corruption is still very present and is a cause for serious concern because the direct political influence on the everyday life of citizens is visible at all levels, it is stated, among other things, in the conclusions of the European Commission’s Progress Report on BiH for 2020.

Legislative inconsistencies across BiH and weak institutional cooperation and coordination continue to hamper the fight against corruption. Results on preventing and combating high-level corruption remain very limited due to operational inefficiencies and political interference, it is noted in the Report on BiH.

In the coming year, according to the report, Bosnia and Herzegovina needs to adopt a law on the prevention of conflict of interest at the state level and complete the legal framework for the protection of those who report corruption.

BiH needs to demonstrate progress in preventing and combating high-level corruption and ensure effective and independent prosecution of Covid-related corruption cases, and to adopt a new state-level anti-corruption strategy and an action plan and ensure effective functioning and coordination of anti-corruption bodies at all levels of government, it is stated, among other things, in the conclusions of the European Commission’s Progress Report on BiH.

The Delegation of the European Union to Bosnia and Herzegovina told FENA that “one of the most important priorities for BiH’s accession to the European Union is progress in the area of ​​rule of law, and especially the ability of the judiciary to show concrete results in fighting corruption and organized crime.”

“Bosnia and Herzegovina needs a more determined political commitment to the highest standards of integrity and transparency in all spheres of society, as well as to prevent conflicts of interest, in order to effectively fight corruption and strengthen citizens’ trust in all public institutions,” FENA has learned from the Communications Department of the European Union Delegation to BiH.

They pointed out that they “repeatedly appealed to the authorities to adopt a new Law on Conflict of Interest at the state level, which would be in line with European standards, and whose implementation would enable significant progress in the fight against corruption in BiH.”

“This is also one of the 14 key priorities from the Opinion of the European Commission on BiH’s application for EU membership. For now, only the Sarajevo Canton has adopted and is implementing a comprehensive law on reporting and verifying data on the property of public office holders, which should be an example to other levels of government,” they stressed.

Furthermore, as they pointed out, the adoption and effective implementation of the Whistleblower Protection Act is equally important, as highlighted in the key priorities of the Opinion. This means that in order for BiH to make progress on its path to the EU, it must ensure adequate protection of whistleblowers from intimidation or retaliation.

“The Opinion also states that final verdicts in high-level corruption cases are very rare and that sanctions do not have an adequate deterrent effect. In addition to these legislative steps, progress needs to be made and results achieved in proactive investigations, confirmed indictments, prosecutions and final verdicts in organized crime and corruption cases, including those at the highest level. A significant number of allegations of corrupt practices during the pandemic further indicated the need to improve efficiency in the processing of corruption cases,” said the European Union’s Communications Department.

They also reminded “that it is necessary to adopt, without further delay, the Anti-Corruption Strategy for 2020-2024, and the corresponding Action Plan, the implementation of which would make the fight against corruption more effective”.

The Agency for Prevention of Corruption and Coordination of the Fight against Corruption points out that it is enough to look at just one report of the European Commission to understand that widespread corruption in BiH and its non-prosecution is a key obstacle to BiH’s European path.

“The annual reports of the European Commission clearly state that all levels of government in BiH show signs of the political sphere being fully immersed into corruption, which directly affects the daily lives of citizens. In addition, it was assessed that no progress had been made in the effective implementation of anti-corruption strategies and action plans and that inconsistencies in legislation throughout the country and weak institutional cooperation and coordination have been evident. It was also emphasized that the effects of prevention and repression of high-level corruption are very limited due to operational inefficiency and political interference,” FENA learns from the Agency for Prevention of Corruption and Coordination of the Fight against Corruption.

They emphasized that “corruption is so widespread that all levels of government show that they are under the control of politics, which is a great obstacle to the work of this Agency.”

“In order to move from the deadlock, it is necessary, first of all, to start implementing the GRECO recommendations, for which appropriate legislative and institutional support must be secured in BiH. Given that corruption is always associated with the decision-making process, we should strive to leave the decision-making process to the discretion of decision-makers as little as possible. Instead, it is necessary to design and implement decision-making in a clearly defined procedure, based on more precise criteria and with the openness of the process to the public,” says the Agency.

They state that it is necessary to reconsider the level and necessity of discretionary powers as an important segment of prevention of corruption and to raise public awareness of the risks of discretionary decision-making, as well as the way in which civil society will monitor whether those powers are used in accordance with their purpose.

“The fact that most of the 14 priorities identified by the European Commission on BiH’s path to candidate status are mostly related to the rule of law and the fight against corruption, i.e. the implementation of key anti-corruption reforms and the adoption of laws which are missing and the improvement of existing laws related to the fight against corruption,  speaks volumes about how much corruption threatens BiH’s path to the European Union,” told FENA  the Executive Director of Transparency International in BiH Ivana Korajlić.

She added that “this includes election legislation, including the financing of political parties, conflicts of interest, public procurement, the protection of whistleblowers and judicial reform, as one of the key issues, given that it has been identified as the weakest link in general and it concerns integrity and efficiency in the fight against corruption.”

“However, when we look at the behavior of the authorities in BiH, where they have mainly invested their efforts to destroy what we already have, that is, to ruin the legal framework and completely destroy institutions and put them under direct political control, and it is done precisely by those who are supposed to enforce the laws. And on the other hand, when we look at this period after the Opinion was issued by the European Commission for BiH and setting those 14 priorities, we see that absolutely nothing has been done,” underlined Korajlić.

According to her, we are witnessing very open obstructions and blockades of the process of adoption of these key laws.

“We have seen this on the example of the law on conflict of interest that has been in the procedure for years, and regardless of the numerous messages coming from the institutions that it needs to be changed, they simply do not want to establish an adequate framework of control and responsibility.

In the same way, we have a story about the law on public procurement that has been on the shelves for a long time. When we talk about the law on the High Judicial and Prosecutorial Council, which has been talked about for years, nothing has been done to improve the appointment process, to reform the HJPC, which has become and identified as one of the key generators of problems. So we see that the authorities in BiH are doing absolutely everything they can to block, to stretch all the processes and obviously think that they will be able to pass some cosmetic changes and that it will be considered as the fulfillment of the priorities even though the EU has clearly emphasized which direction BiH must take,” Korajlić pointed out.