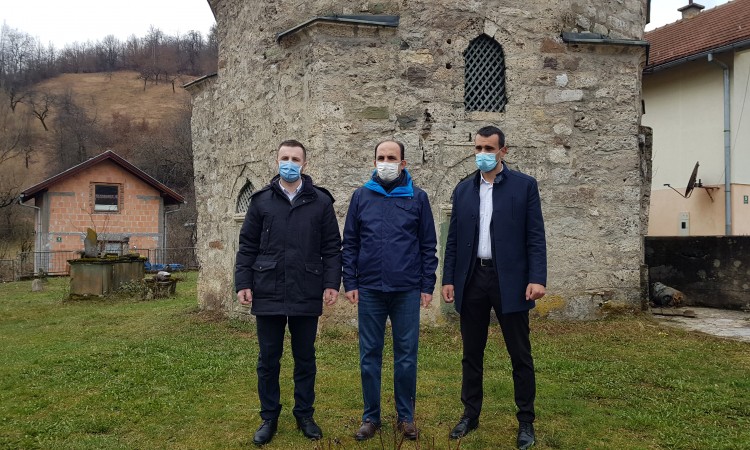 PRAČA, April 6 (FENA) – A delegation from the Turkish city of Konya, led by Mayor Ugur Ibrahim Altay, visiting Bosnia and Herzegovina, today toured the Pale municipality in the FBiH, where they met with the mayor of this local community, Almin Ćutuk, and visited the Semiz Ali Pasha’s Tourbet and the mosque in Prača.

The Mayor of Konya, ​​accompanied by representatives of businesses from this Turkish city and the mayor of Sarajevo’s Novi Grad Municipality, Semir Efendić, talked with Mayor Ćutuk about the history of this area and the establishment of Semiz Ali Pasha’s endowment in Prača, which includes the mosque built in classical Ottoman style, the tourbet and the fountain.

According to the official data from the Islamic Community in BiH, the mosque was built around 1521 and is considered one of the oldest in BiH.

The guests from Turkey were also introduced to the resources of this part of the Pordrinje Canton – Goražde, opportunities for potential Turkish investors.

The mayor of Konya Ugur Ibrahim Altay stated that he expected a return visit and future cooperation.

“I have been to BiH many times, but this is my first time coming to Prača, with the desire to congratulate the newly elected mayor, meet the place where he comes from, and I am extremely pleased to be here today. By the way, I am the president of the Union of Cities and Municipalities of the Turkish world. We are now confident that this area is suitable for agriculture, and Konya is one of the centers for agriculture in Turkey, where we founded the Union of Cities and Municipalities engaged in agriculture. We invited the mayor to join, and for this municipality to be part of that Union, and this is the first step towards cooperation and support from the Agriculture Union, and we will also help the development of agriculture in the Municipality of Pale – Prača,” said Altay.

The Mayor of Pale Municipality in the FBiH Almin Ćutuk announced that this local community will accept the invitation for membership in the Union.

“It is a great pleasure and honor to host a delegation of our fraternal Turkey, and our friend Semir Efendić, and accept the invitation of our municipality to join the Union of Cities and Municipalities of the Turkish world. The municipality of Pale has exceptional natural potentials for the development of agriculture and tourism and we hope that Turkish investors will be able to recognize this. During the talks we agreed on concrete assistance to our municipality that will be realized soon” said Ćutuk.