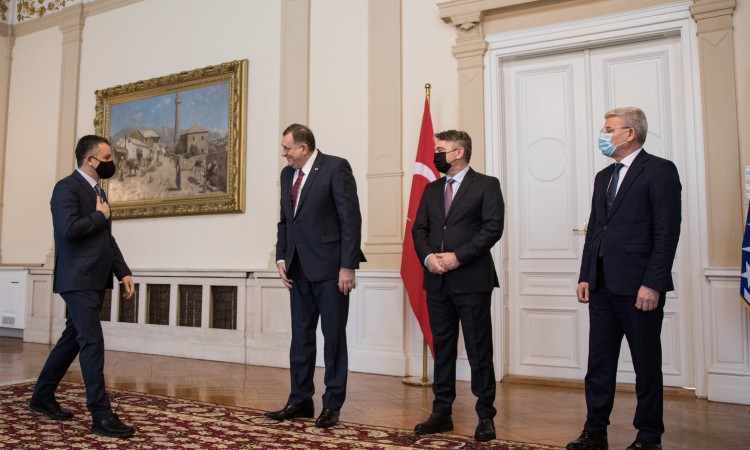 Dodik, Komšić and Džaferović expressed satisfaction with the visit of Minister Pakdemirli, emphasizing that it comes at an important moment for the development of overall relations between Bosnia and Herzegovina and the Republic of Turkey.

The interlocutors assessed that the bilateral cooperation has been extremely intensive and successful, without open issues, and expressed interest in continuing o that path in the future.

The announced visit of the members of the Presidency of BiH to Ankara, at the invitation of the President of the Republic of Turkey Recep Tayyip Erdogan, will contribute to the further strengthening of relations and the improvement of cooperation.

At the same time, it was stated that the signing of the Agreement on Cooperation in Infrastructure and Construction Projects, including the Sarajevo-Belgrade motorway, will strengthen the already good bilateral relations.

Members of the Presidency of BiH expressed gratitude to the Government of the Republic of Turkey and President Erdogan for their support and assistance in the implementation of infrastructure and other projects in Bosnia and Herzegovina.

On this occasion, the Free Trade Agreement between Bosnia and Herzegovina and the Republic of Turkey was welcomed, which, as it was pointed out, will contribute to the increase of trade, and thus to the strengthening of the economies of the two countries.

The interlocutors expressed readiness to support the initiative for signing a Memorandum of Understanding in the field of forestry, in order to support cooperation in this economic area.

They also expressed their support for the signing of protocols that will regulate cooperation in other areas of common interest, such as rural development, university cooperation, sports, and other, stated the Presidency of BiH.