Home BiH Milanović: The right to elect the Presidency member has been stolen from Croats

Milanović: The right to elect the Presidency member has been stolen from Croats 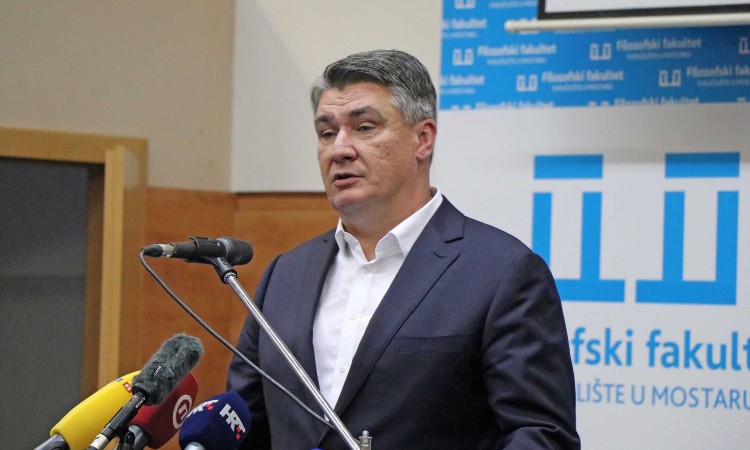 MOSTAR, July 12 (FENA) – Croatian President Zoran Milanović said in Mostar on Monday that he was not a nationalist, but that he must say “that the right to elect a member of the BiH Presidency has been stolen from the Croat people.”

“With all do respect for Bosnia, deep respect and grief for the victims and families, but the Croats, in fact, have been robbed of the right to elect their member of the Presidency of BiH. What is not clear about this? What is moral here? What is the right thing there?” said the Croatian president after the meeting with the chancellor and vice-chancellors of the University of Mostar and the lectures he gave at that university.

He reiterated his view on the position of the Croat people in Bosnia and Herzegovina and said that it does not make him a nationalist.

“So, in order to be a cosmopolitan, I have to sympathize with someone else’s secular nationalism. I am not a nationalist and I expect that others will not be either. That is the basics and that is why I do not go deeper than that. I’m not interested in the details of the election law. Should it be changed? I do not know. Why? Because what needs to be done is according to the Constitution of Bosnia and Herzegovina. Everything is clear there,” Milanović told reporters.

He pointed out that “for the first ten years it never occurred to anyone to elect a member of the Presidency to the Croats, and then someone smart decided to change that”.

“This is perhaps the best counter-proof of what this is all about,” Milanović said.

Asked whether the Republic of Croatia would react if “Komšić happens again next year,” Milanović replied that he hoped that it would not happen because it was contrary to the letter and spirit of the Dayton Agreement.