Home BiH More than 1,000 jobs created with the help of FARMA II project

More than 1,000 jobs created with the help of FARMA II project 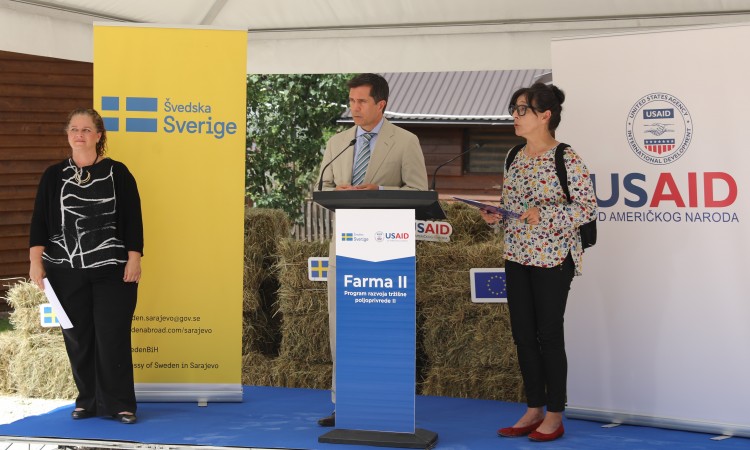 Over the last four years, the Sweden/USAID FARMA II project has focused on the development of five agricultural sectors – dairy, poultry, fruits and vegetables, medicinal and aromatic plants, and the honey sector. The primary goal of FARMA II was to improve agricultural and economic opportunities, helping local authorities and farmers’ organizations to adopt EU and other international agricultural and food standards and modernize production.

“The success of the decade-long partnership between the US and Swedish governments is reflected in the achievements of the joint USAID/Sweden FARMA I and FARMA II projects. It is evident how agriculture has advanced in BiH in those years. Therefore, USAID, developing its new five-year strategy, decided to abandon direct agricultural aid and focus its investments in tourism, especially in agro-tourism, where we see great opportunities for growth,” said Nelson.

Swedish Ambassador Strömquist said that today they were celebrating the achievements of the FARMA II project funded by Sweden and USAID.

“Over the last ten years, we have supported Bosnia and Herzegovina’s policy development and improvement of the legislative and regulatory framework needed to meet EU requirements in the agricultural sector, and facilitated accreditation and certification, thus enabling poultry and egg exports to the EU market for the first time. In short, FARMA II has helped its beneficiaries double their net sales over the last five years, triple their exports and, most importantly, create more than 1,000 new jobs,” said Ambassador Strömquist.

Ambassador Sattler said that the EU remains committed to supporting transformative, green and digital practices in agriculture and other sectors.

“Our ongoing assistance from IPA 2018 funds worth 30 million euros for agriculture and rural development, as well as for food, animal and plant safety began last year. Grants will be provided to farmers and businesses and help align with the EU acquis and build capacity by 2024. Moreover, the EU is providing an additional 18m euros earmarked for recovery from the pandemic and improving the resilience of SMEs and industries in BiH under the EU4Business and EU4Agri projects,” Sattler added.

By supporting the agricultural sector in BiH for more than two decades, the United States has invested about 60 million USD in the development of thousands of farmers, brought BiH closer to Euro-Atlantic integration, and set the country on the path to self-sustainability. The bulk of US agricultural support to BiH was through three programs, the 2003 LAMP, followed by FARMA I and FARMA II in partnership with the Swedish Government. Overall, USAID projects have helped introduce new rural strategies and products, provided modern equipment, helped create jobs and increased exports to EU countries, it is said in a joint statement from USAID and the Swedish Embassy.