Home BiH Novalić: 2021 budget draft contains all the elements to stabilize the situation

Novalić: 2021 budget draft contains all the elements to stabilize the situation 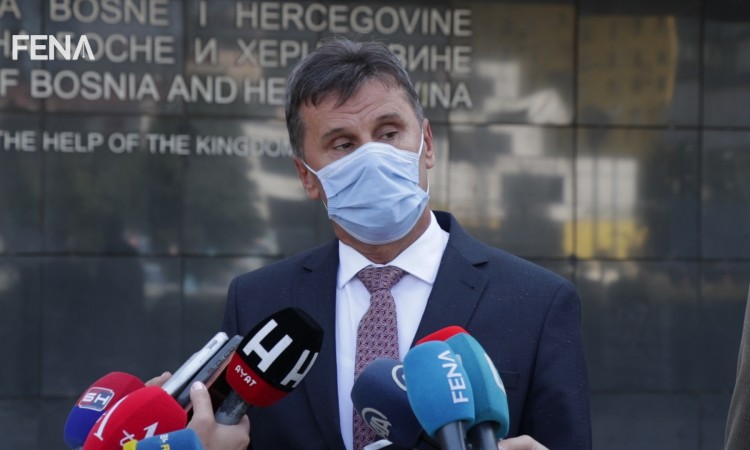 SARAJEVO, December 29 (FENA) – The proposed budget of the Federation of Bosnia and Herzegovina for 2021 contains all the elements for stabilizing the situation, said in his address today the FBiH Prime Minister Fadil Novalić to the MPs at today’s session of the House of Representatives of the FBiH Parliament.

The House is urgently considering the budget proposed by the FBiH Government, as delegates of the House of Peoples, whose consent is also needed for the FBiH budget for 2021 to become operational, should do it at tomorrow’s session.

Prime Minister Novalić, explaining the draft budget to the members of the House of Representatives today, first presented the economic consequences of the global pandemic COVID 19, which did not bypass the Federation of BiH, and concluded that the budget for 2021 will contain measures to rehabilitate GDP and jobs whose number has decreased since the beginning of the pandemic in the Federation of BiH, but later increased thanks to the new ‘corona law’ and other measures taken.

Tax revenues are almost at this year’s level because the Government believes that the planned measures will yield results.

The planned budget revenues from the Pension and Disability Insurance contributions are expected at this year’s level, and the same applies to revenues from indirect taxes.

The Prime Minister announced the continuation of a restrictive policy in public spending for next year, including the salaries and compensation of employees’ costs, he said that the total amount increased slightly after it was reduced with the beginning of the pandemic. And with the increase, it is below the level of the budget revision for 2020.

The planned budget expenditures are 4.4 billion KM, of which 227.5 million KM are planned for capital transfers or 90 million more than in 2020. 115 million is planned for the construction of expressways. Another 20 million KM will be added to this amount during the year.

In the continuation of the fight against the consequences of the COVID 19pandemic, it is planned to intensify measures, assistance to lower levels of government, cantons and municipalities in the amount of 230 million KM, as well as 150 million to the Economic Stabilization Fund.

An additional 50 million KM will be provided for employment support, as well as another 25 million KM of support to the economy through the guarantee fund; then 10 million KM for binding past work service of employees in private and public companies, and assistance of 9 million KM to the airports in Sarajevo, Mostar and Tuzla as entities that are suffering significant consequences of the crisis caused by the pandemic.

The government has also planned to invest 25 million KM for the construction of the airport in Bihać.

Health institutions will receive twice as much money as before, 60 million KM, for the fight against COVID 19, said Novalić, adding that they already paid the money for COVID 19 vaccines.

A total of 16.5 million KM is provided for benefits to parents of children with special needs, and three million for social protection institutions.

Transfers for pensions, agriculture, returnees and other beneficiaries have not been affected and they remained at the current level.

Prime Minister Novalić concluded that all planned measures are realistic and sustainable and emphasized that it is extremely important for the Federation of BiH in the coming year to pass laws on contributions and income tax.