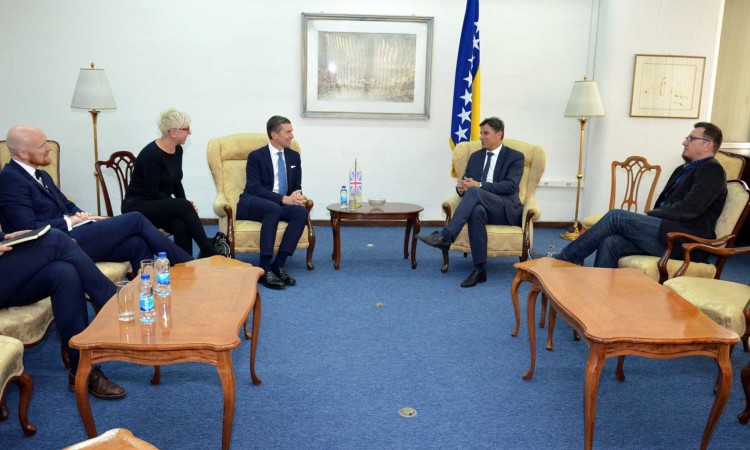 SARAJEVO, May 15 (FENA) – Prime Minister of the Federation of BiH Fadil Novalić met yesterday with the United Kingdom Trade Commissioner for Europe Andrew Mitchell and British Ambassador to BiH Matt Field at headquarters of the FBiH Government in Sarajevo.

They emphasized the need to expand economic cooperation between Great Britain and BiH, taking into consideration Brexit as well, because joining the Stabilization and Association Agreement our country assumed the obligation to follow and implement regulative of the European Union, including the ones which relate to future trade relations between the EU and Great Britain. However, with mutual desire and interest of the two countries, all issues can be resolved and exchange can be on a higher level, it was stated during the meeting.

Introducing his guests with plans of the FBiH Government concerning improvement of business environment, Prime Minister Novalić emphasized three important goals. One of them is quick registration of new companies, which will be enabled through one-stop shop system, and they will also work on reducing parafiscal levy.

They also discussed tourism, which was assessed to be one of the most perspective and fruitful branches of local economy, PR Office of FBiH Government stated.