Home BiH Novalić: Our priority is to procure the vaccines and support the health sector

Novalić: Our priority is to procure the vaccines and support the health sector 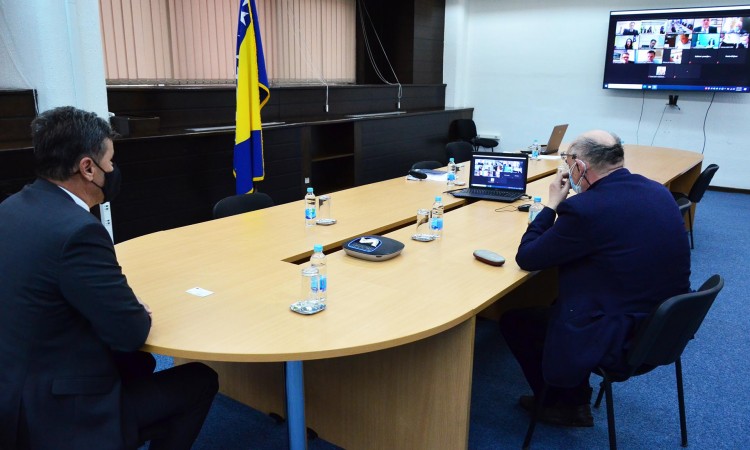 SARAJEVO, April 6 (FENA) – The Prime Minister of the Federation of BiH, Fadil Novalić, held an online meeting today with the cantonal prime ministers, with the aim of overcoming the difficult situation caused by the coronavirus pandemic, harmonization and joint action in the FBiH.

The cantonal prime ministers, presenting new data on the epidemiological situation in the cantons in the last seven days, pointed to a mostly stagnating situation, however, although there was no significant increase in the number of new cases, there are more and more patients with a more severe clinical situation or need for hospitalization.

According to the epidemiological situation in the entire Federation of BiH, and the latest data from the health sector, the seven-day incidence at the FBiH level is 324 cases per 100 thousand inhabitants, and the highest incidence was recorded in Herzegovina-Neretva, West Herzegovina, and Sarajevo cantons. It was stated that it is necessary to strengthen the supervision over the implementation of existing measures.

Prime Minister Novalić informed those present about the activities undertaken by the FBiH Government for the procurement of vaccines. He stressed that the procurement of vaccines and assistance to health care institutions are priorities in the work of the government, and added that they are actively working on taking all available steps that the FBiH can take in the current situation.

“In addition to the established contacts with certain embassies, we also directly addressed American companies, producers of coronavirus vaccines. We also made contact with India. We have also entered the state program with China, and next week we should start direct negotiations for the purchase of 500,000 Chinese Sinopharm vaccines,” said Prime Minister Novalić.

He informed them about the announced quantity, and the dynamic of the arrival of vaccines in BiH through the Covax and the EU mechanisms, this month and until the end of the second quarter.

It was also pointed out that in the future process of the vaccination plan, after health workers and priority groups, it is necessary to consider the order of other priorities, among which should be occupations that by the nature of their work make a large number of contacts, such as media workers, employees in shops, and the hospitality sector.

The Prime Minister informed the cantonal prime ministers that the FBiH Government is actively preparing a program of support to the health sector in the amount of 60 million KM, which refers to assistance to health institutions and clinical centers, and that it should be on the agenda of the FBiH Government very soon.

He also referred to the importance of maintaining the liquidity of the Federation of BiH, which is the guarantor of the stability of the health, pension and social fund, and presented the encouraging latest official data on positive economic trends in the FBiH, which show that the collection of direct taxes in the first quarter of this year increased by 43 million KM, or 3.36 percent compared to last year.

Today’s meeting was a continuation of the agreed joint action and better coordination between the FBiH PM and cantonal prime ministers on a weekly basis, and the next meeting via video link will be held next Monday.