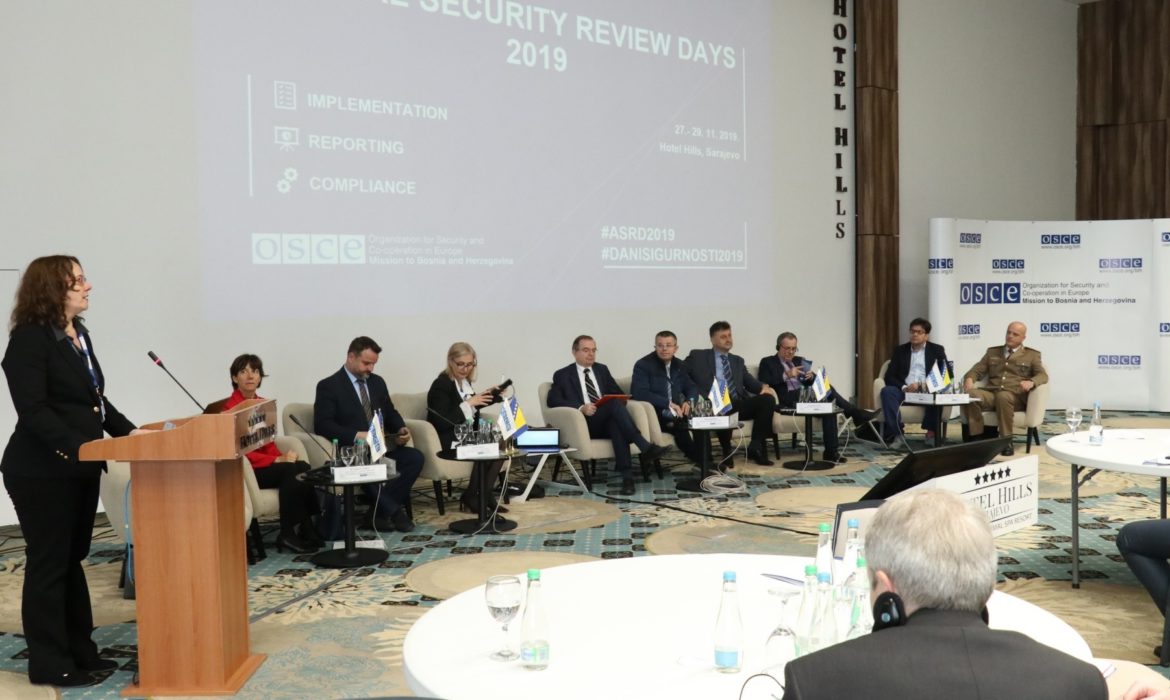 SARAJEVO, November 29 (FENA) – Arms control, violent extremism and radicalization that lead to terrorism and cyber security were the focus of “Annual Security Review Days 2019”, a three-day conference organized by the OSCE Mission to Bosnia and Herzegovina (BiH), which concluded today in Sarajevo.

The objective of the conference was to assess the progress BiH has achieved in terms of its compliance with OSCE commitments and develop recommendations for measures aimed at increasing capacities of the BiH security sector.

“This event is an important opportunity for key security actors to jointly reflect on the current state of the implementation of OSCE security-related commitments, to strategically plan in view of agreed priorities, and to reinforce their commitment to ensuring that BiH meets its international obligations,” said Susan Pensa, Head of OSCE Mission to BiH Department for Security Cooperation. “All of us recognize the significance of inclusive, democratic and transparent policymaking. The security challenges of the 21st century cannot be adequately responded to in isolation – not by a single authority, Ministry or country.”

The conference was an opportunity to mark the 25th anniversary of the adoption of the OSCE Code of Conduct on Politico-Military Aspects of Security, as the first multilateral instrument to encompass norms and principles regulating the conduct of armed and security forces, stated the OSCE Mission to BiH.

Sead Jusić, Deputy Defense Minister of BiH, emphasized that it was of particular importance that the OSCE’s Code of Conduct was applied in all segments of society. “BiH has established mechanisms and tools for practical implementation of the commitments from the Code. The Defense Ministry, over the past several years, adopted a number of bylaws and regulations governing the issues of transparency of work, professionalism and ethics, as it impossible to talk about democratic society and transparency without these elements,” said Jusić.

Emir Vajzović, Head of the Institute for Social Sciences Research at the Faculty of Political Science of Sarajevo University said that it was important that society as a whole understands that digitalization brought a range of challenges for all actors in the society.

“In terms of the security sector, the digital transformation introduced new hybrid, asymmetrical challenges, which require adequate response by state actors and their mutual communication. The OSCE’s Code, even 25 years after its adoption, remains a significant tool for overcoming all security challenges, preventing and ending conflicts and, what is the most important, for building trust among the OSCE participating States,” said Vajzović.