Peace Monument, a symbol of coexistence in BiH, unveiled in Bosanski Petrovac 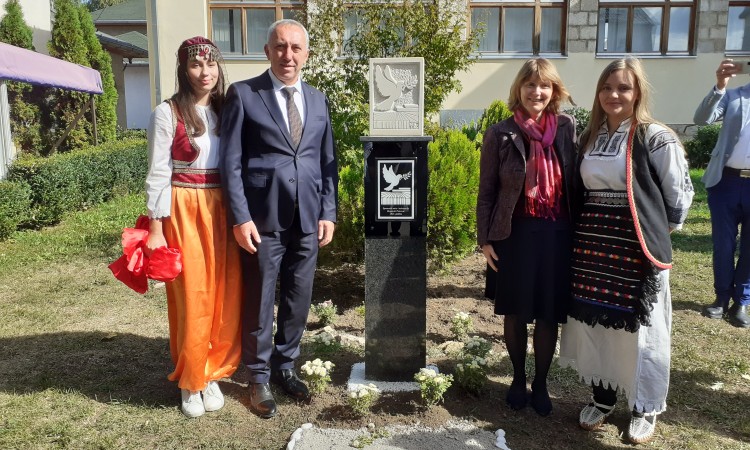 BOSANSKI PETROVAC, September 22 (FENA) – Representatives of the international community in BiH unveiled the Peace Monument in Bosanski Petrovac today, as a symbol of unity in Bosnia and Herzegovina.

“Although the monument seems like a small gesture, in fact it has an enormous meaning. Bosanski Petrovac is one of the few communities in BiH that has decided to follow this path and pay respect to everyone, regardless of their religious and national affiliation. This is the culmination of a month-long celebration of peace and tolerance, which has filled Bosanski Petrovac with activities and messages emphasizing love, coexistence, cooperation and wealth that symbolize multiethnic and multi-religious communities like this one,” said the Head of the OSCE Mission to BiH Kathleen Kavalec.

Mayor of Bosanski Petrovac Mahmut Jukić and Prime Minister of the Una-Sana Canton Mustafa Ružnić addressed the citizens gathered today on the occassion of the unveiling of the Peace Monument.

“We can be a positive example to all local communities that a life of unity and acceptance of all values and peoples is possible in Bosanski Petrovac. Thanks to the councilors, we accepted the initiative to build a Peace Monument in this place. It is a sign of respect for tolerance and freedom, and a prosperous future for BiH,” said Mayor Jukić.

The Prime Minister of the USC, Mustafa Ružnić, expressed his pride that the USC has made such a step forward by unveiling the Peace Monument.

UN Resident Coordinator in BiH Ingrid MacDonald underlined that Bosanski Petrovac should be an example to everyone and called on other communities and officials to follow the example of that city.

“Bosanski Petrovac is showing us that, regardless of their nationality or origin, people simply want to move forward in a constructive way. And that way involves rebuilding trust and recognizing that everyone has suffered and that everyone has common aspirations and priorities,” MacDonald added.

On behalf of the 2021 Swedish Chairmanship of OSCE, Swedish Ambassador to BiH Johanna Strömquist said that the monuments symbolize what we are striving for in the future.