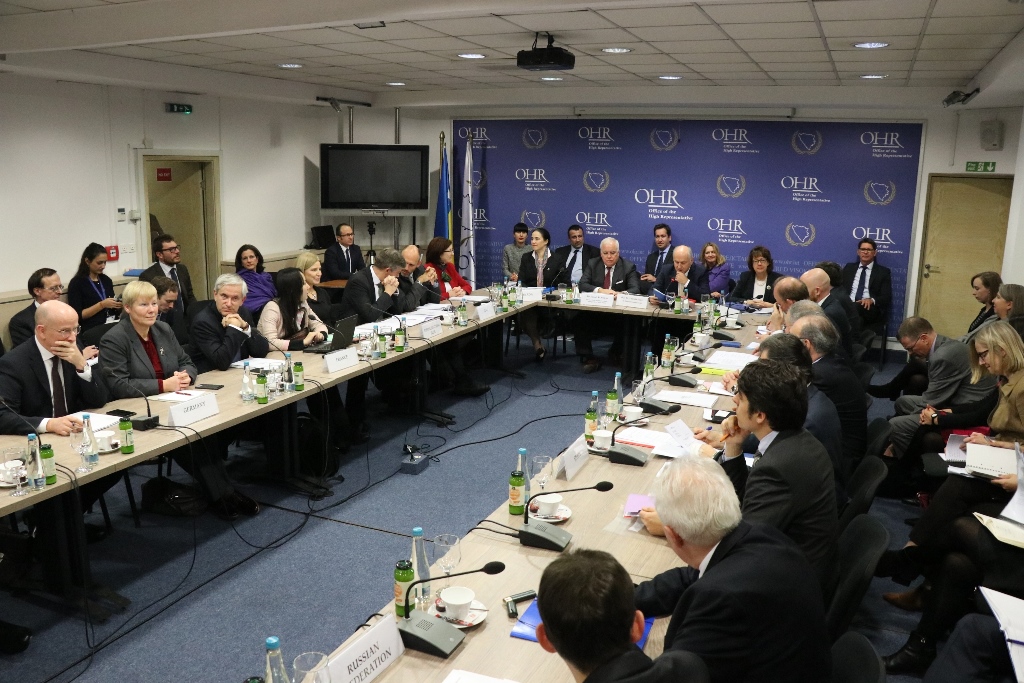 SARAJEVO, June 3 (FENA) – The Peace Implementation Council Steering Board (PIC SB) Political Directors met via video conference on 2-3 June 2020 to review the process of implementation of the General Framework Agreement for Peace (GFAP), which remains the basis for a stable, secure and prosperous Bosnia and Herzegovina (BiH).

The PIC SB reminded all parties of their obligation to comply fully with the GFAP, all its annexes, and decisions of the High Representative.

It reaffirmed its unequivocal commitment to the territorial integrity and fundamental structure of BiH as a single, sovereign state comprising two entities.

The PIC SB restated that the entities have no right to secede from BiH and only exist legally by virtue of the BiH Constitution.

The PIC SB reiterated its full support for the High Representative in ensuring complete respect for the GFAP and carrying out his mandate under Annex 10 and relevant UN Security Council Resolutions, which remains unchanged. It underlined that the International Community retains the necessary instruments to uphold the GFAP. The PIC SB emphasized the need to fully implement the 5+2 agenda, which remains necessary for the closure of the Office of the High Representative.

The PIC SB acknowledged the efforts of the authorities at all levels in combating the COVID-19 pandemic, which have contributed to preventing widespread outbreaks and minimizing the loss of life. By setting aside ongoing political disputes, the functioning of the state-level decision-making institutions played a key role in fighting the pandemic. The PIC SB commends the citizens of BiH for confronting these extraordinary circumstances with a remarkable degree of discipline, solidarity and unity, and expresses condolences to the families who lost loved ones. The PIC SB welcomed the ending of the states of emergency in the entities and the Brčko District and the respective governments and parliaments returning to work in accordance with standard procedures.

The PIC SB encourages the authorities at all levels to coordinate their efforts towards a nationwide economic recovery, and welcomes the 2 June decision of the BiH Council of Ministers (CoM) on the distribution of the EUR 330 million loan from the International Monetary Fund in accordance with the existing agreement.

The PIC SB is concerned by reports of suspect procurements during the pandemic involving millions of convertible marks in public funds. The spending of public taxpayer money and of loans and grants by the international community are equally affected. The PIC SB urges the state-level authorities to adopt amendments to the BiH Law on Public Procurement aimed at bringing it closer to the EU acquis and to adopt the measures recommended in the 2016-2020 Strategy for Development of the Public Procurement System as priorities. The PIC SB called on the relevant law enforcement agencies to investigate and prosecute suspicious cases.

The PIC SB welcomed the initiative of the BiH Presidency to lead reforms aimed at fulfilling the European Commission’s Opinion 14 key priorities, expressed appreciation for the Collegium for European Integration to take forward the initiative. In this regard, the PIC SB also called on all actors to cooperate with the aim to move forward on BiH’s EU path. Furthermore, PIC SB welcome the establishment of the socioeconomic task force and call on it to become operational.

The PIC SB urged the BiH authorities to make the necessary reforms related to the rule of law and the fight against corruption, which are also a part of the EU agenda. The PIC SB underscored that reforms in the area of the judiciary are a fundamental priority and expressed the international community’s commitment to assist the BiH authorities in their endeavor. The PIC SB encouraged the political parties represented in the BiH Parliament to demonstrate their commitment to judicial reform, including through the work of the Investigative Committee of the BiH House of Representatives for Assessing the State of Judicial Institutions in BiH.

The PIC SB took note of the need to reform the High Judicial and Prosecutorial Council (HJPC) to address conflicts of interest and other integrity related issues, strengthen independence, disciplinary and professional accountability, and enable legal remedies against HJPC decisions, calling on all authorities to ensure that the Law on the HJPC is amended as soon as possible.

The PIC SB deplored the continued threats by the authorities of the Republika Srpska to withdraw from state institutions and block decision-making at the state level. In this regard, the PIC SB reiterated its full support for the work of the BiH Constitutional Court and its judges.

The PIC SB supported the work of the Central Election Commission (CEC) in the preparation for the 2020 Local Elections and welcomed the presentation of its President Vanja Bjelica-Prutina in this respect. The PIC SB urged the authorities of BiH to promptly adopt the long-overdue state-level budget for 2020 to allow for the unimpeded functioning of the state-level institutions, including the CEC, and the discharge of their constitutional and legal responsibilities. To enable the CEC to effectively carry out technical preparations for the 2020 elections, the PIC SB calls on the BiH CoM to grant, in the interim, a special decision on expenditures in line with the Law on Financing of Institutions of Bosnia and Herzegovina. The PIC SB recalls that the CEC is an independent body whose authority is derived from the BiH Election Law, and that the Entity Election Commissions have no responsibilities in the organization of elections other than those granted to them by the CEC, and must act in accordance with the BiH Election law.

Following the presentation by the NGO “Naše društvo” on the situation in Mostar after eight years without a City Council, the PIC SB also called on political actors to urgently implement relevant decisions by the BiH Constitutional Court and the European Court on Human Rights concerning local elections in Mostar, finding an acceptable agreement by the deadline established by the latter and ensuring that free and democratic elections may finally be held in Mostar this year, for the first time since 2008.

Marking the 25th anniversary of the genocide in Srebrenica, the PIC SB pays its solemn respect to the victims, survivors and their families.

“The commemoration serves to remember the past and reminds of the importance of peace in BiH and the continued need to abstain from irresponsible, revisionist and divisive rhetoric. All war crimes and crimes against humanity committed in the course of the conflict in BiH during the 1990s must not be forgotten or denied, and all responsible must be apprehended and brought to justice, while convicted war criminals must never be glorified,” stated Communiqué of the Steering Board of the Peace Implementation Council.

The PIC SB urges political leaders and elected officials to do their utmost to commemorate events and victims with dignity, and to have a joint commemoration to promote peace and reconciliation, while supporting continued efforts to find and identify the victims.

The PIC SB urged the BiH authorities/political and institutional leaders to address the following priorities without further delay: prepare and adopt the action plan for the 14 key priorities of the European Commission’s Opinion and start to implement it. Deliver the methodology for the Program of Integration of BiH into the European Union; Appoint the new Federation Government, as well as the governments of Herzegovina-Neretva Canton and Canton 10, all of which remain unappointed with governments from the previous mandates still in place more than a year and half since the October 2018 General Elections, and appoint pending positions at all levels, including in the judiciary and crucial state-level agencies; Prepare and carry out local elections througout the country, ensuring they are conducted in a free, fair and safe manner in line with European standards. Refrain from divisive and destabilizing rhetoric in the campaign for the 2020 Local Elections, and instead focus on local governance challenges that affect lives and livelihoods of citizens; Reach agreement on electoral rules for Mostar, which must remain a unified city. This situation must be resolved without further delay and independently of other pending matters; Implement the Sejdic/Finci decision, as well as related decisions of the European Court of Human Rights, which remains unimplemented after more than a decade, and refrain from taking legislative or political steps that would make the implementation of these rulings more challenging; Strengthen cooperation among all levels of authority in BiH and provide sufficient funds to manage migration as exclusive competencies of the state, and share the burden of accommodating migrants. In line with international law, the restrictive measures limiting the movement of migrants must be lifted.

The Russian Federation does not agree with this communiqué, the OHR said.