Home BiH Plenković: All peoples should be legitimately represented in BiH institutions

Plenković: All peoples should be legitimately represented in BiH institutions 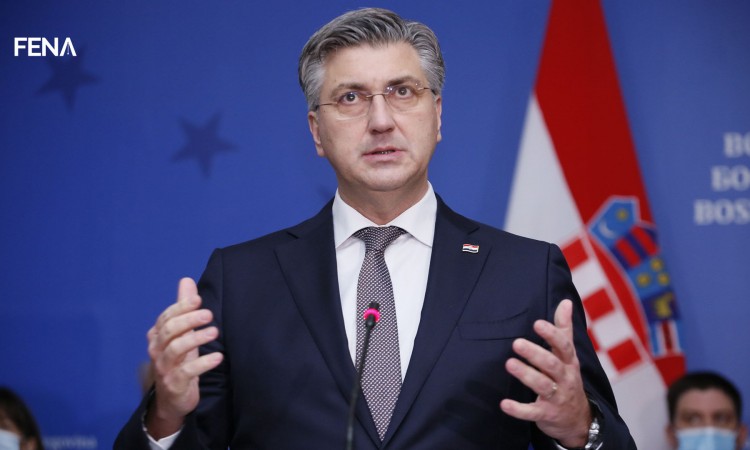 SARAJEVO, December 13 (FENA) – Prime Minister of the Republic of Croatia Andrej Plenković said at a press conference in Sarajevo today that an agreement should be reached between the political parties in BiH, domestic institutions and on the basis of an agreement that will enable all peoples to be legitimately represented in all institutions in BiH.

“I emphasize the position of the Croat people because we are not satisfied with the practice that has existed since 2006, which ultimately represents certain difficulties in the normal functioning and institutional relations between Croatia and BiH.

We would like our relations to be easy-going, intensive, weekly if necessary, and to do everything to improve relations between the two countries. That is why I am interested in the talks in the state parliament, where the key political actors and party leaders perform their duties, to see what the mood is today and whether something can be expected until the end of 2021 or these talks will continue into 2022. We would like this agreement to result in a fair agreement, in order to avoid the anomalies we have witnessed over the past few years,” said Plenković.

He stressed that the position of Croats in BiH must be improved and that they should be legitimately represented in the BiH institutions.

“Therefore, the process of reforming the Election Law is important. We want a consensus, an agreement ultimately respecting what was agreed by the leaders in Dayton, to only enable what is real, natural, fair and good, and that is that everyone is legitimately represented in the institutions. Therefore, I believe that a solution will be found,” Plenković pointed out.

He also commented on Croatia’s decision to dispose of radioactive waste at the site of Trgovska gora.

“Croatia is in a continuous dialogue with the BiH authorities on this topic. What is important to keep in mind is that there is no danger, any threat or any concern for the citizens in terms of that location given the very reliable scientific information we have.

The area of Trgovska gora site is primarily a military facility where no one lives near the location, there is no danger for the health of the citizens of Croatia, and even less for the citizens on the border of BiH. Through dialogue in the upcoming period, we need to clarify any elements that cause concern for the citizens and institutions of BiH and find a solution with which we will be satisfied, and with which the citizens of BiH will feel calm and secure,” said Plenković.

As part of his visit to BiH, Plenković met with the Chairman of the BiH Council of Ministers, Zoran Tegeltija, followed by a meeting with members of the collegia of both houses of the BiH Parliamentary Assembly.