Home BiH Plenković in Mostar: Croatia will support BiH on its EU path

Plenković in Mostar: Croatia will support BiH on its EU path 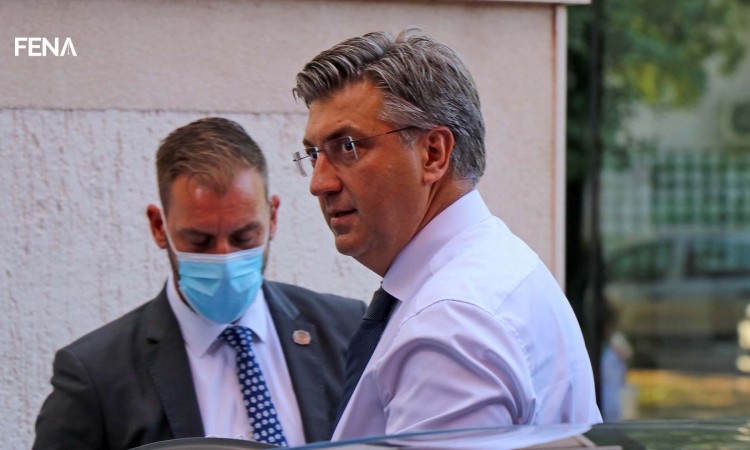 MOSTAR, September 14 (FENA) – Croatian Prime Minister Andrej Plenković said today during his visit to Mostar that Croatia will strongly support BiH and develop cooperation with all three constituent peoples, and that it would be a state that would support BiH on its path to the European Union and Euro-Atlantic Alliance.

“We will support BiH because Croatia believes that this is the only right path and our true role at this time, respecting BiH as a neighboring and friendly state, its sovereignty and above all respecting political parties and institutions that should agree on further issues related to the functioning of BiH through internal agreements,” said Planković, who is staying in Mostar on the occasion of the enthronement of Mostar Bishop Petar Palić, and after a meeting with the Deputy Speaker of the House of Peoples of the BiH Parliamentary Assembly and HDZ BiH President Dragan Čović.

He pointed out that it is important for Croatia to respect the principles of equality in this context, especially the Croats as the smallest constituent people.

Plenković reiterated that it is important for Croatia to respect the Dayton Agreement in its entirety.

“If the principle of legitimacy and political representation of the constituent peoples is respected, then there are no such issues,” said Plenković and pointed out that it is of utmost importance to continue the dialogue which should lead to certain changes.

Plenković and Čović, among other things, discussed the local elections in BiH.

Čović pointed out that HDZ BiH and its partners want to win all seats when it comes to municipal mayors and town mayors where Croats are the majority.

“After 12 years, Mostar will have elections, which is a special challenge and I believe that HDZ BiH and other parties within the Croat National Assembly of BiH will achieve a quality result and receive support for their policies and programs and take responsibility in local governments after the elections this fall,” Plenković pointed out.