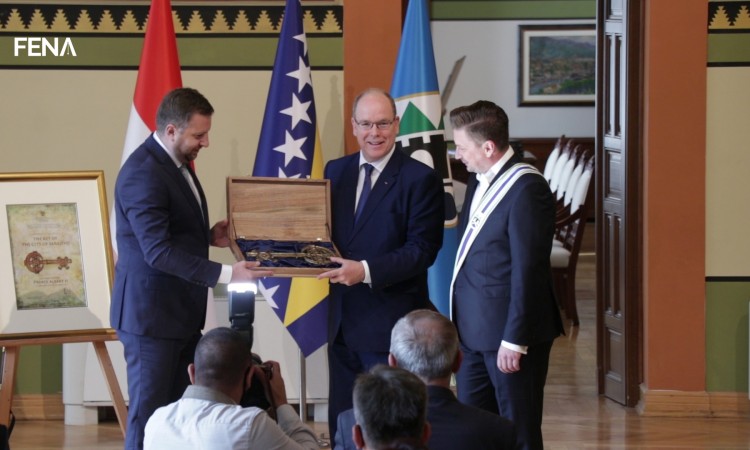 On that occasion, they also handed over the recognition and charter, which symbolizes the lasting connection between the City and its citizens.

Expressing gratitude, Prince Albert said his visit to Sarajevo was an opportunity to strengthen relations and establish better co-operation.

“The City Hall is the ‘phoenix of Sarajevo’. It rose from the ashes after everything that hit this city,” he said and pointed out the importance of the Olympic Museum, which was officially opened in Sarajevo last night.

Prince Albert said that the renovation of the museum is full of symbolism and arouses special emotions in people and memories of the Winter Olympic Games held in 1984, but also of the EYOF in 2019.

“These values will be preserved for future generations to learn about the history of the capital. I would like to stay in Sarajevo for a few more days, but I am sure that I will return here again to celebrate new successes with you,” said Prince Albert II of Monaco.

Mayor Skaka and Chairman Gavrić thanked the distinguished guest for his visit and said that coming to Sarajevo, as well as his support is of immeasurable importance for the promotion of BiH sports and the BiH Olympic Committee and proof that Sarajevo and BiH can make events worth of attention of the European and world public.

“The Key to the City of Sarajevo” is the crown and the best way for Sarajevo, as the capital of BiH, to symbolically repay Prince Albert II for selfless help, commitment to development and preservation of civilization values and promotion of peace,” Skaka pointed out.

After the award ceremony, the Prince of Monaco signed the book of impressions in the City Hall and then walked through the Old Town.

The “Key to the City of Sarajevo” award is given to prominent personalities who have contributed to the promotion, support and improvement of sports, sports activities of Sarajevo and BiH at the international level.