Home BiH Radončić: We will not tolerate persons walking around and spreading the virus

Radončić: We will not tolerate persons walking around and spreading the virus 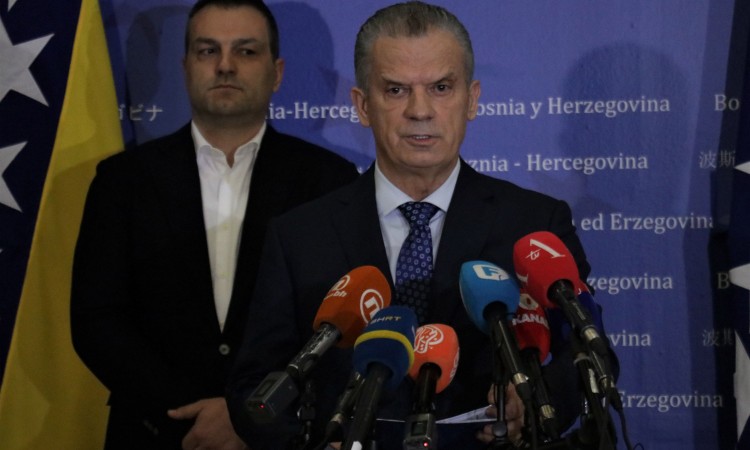 SARAJEVO, March 20 (FENA) – The BiH Security Minister and Chairman of the Coordination Body of BiH, Fahrudin Radoncčić said at a press conference in Sarajevo today that tents have been erected at all border crossings except Orašje and Dubica.

Minister Radončić said that with the help of UNDP, the BiH Ministry of Security has ensured that over the next few days, two entity governments – the Government of the Federation of BiH and the RS – can buy 50,000 coronavirus tests.

He also said that thanks to the FBIH Civil Protection Service Crisis Staff and FBiH CPS Director Fahrudin Solak, the situation with the tent settlement in Lipa, which heavily burdens the Una-Sana Canton, would be addressed in such a way that “they would send 30 tents, where they could fit 200 beds, and as many blankets and everything else that is needed.”

The Minister stated that the Coordination Body would propose to the Council of Ministers of BiH the option to impose no VAT or customs duties on medical equipment, materials, while fighting the coronavirus.

He says he spoke with the Chinese ambassador today, and that assistance from the country is expected to be in the next 15 days.

Minister Radončić informed the press that he had a videoconference today with the directors and heads of security agencies in BiH.

“At the moment, the most important thing is to out the persons in isolation under control. We need to understand that our citizens must be in isolation and that we will no longer tolerate walking around and spreading the virus and potentially killing people,” said Minister Radončić.

He says his recommendation was to absolutely use the legal authority, that is, to issue criminal charges. He added that the measures produce results.

He cited the example that on March 6, there were 106,362 persons who crossed the BiH border in both directions, and on March 19, there were only 8,924 persons.

“We have significantly reduced the number of crossings, which I think is very good thing,” Radončić said at the press conference.