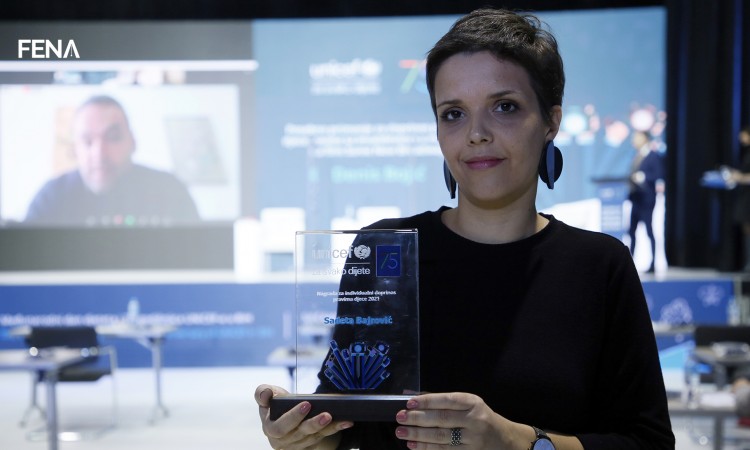 SARAJEVO, November 19 (FENA) – UNICEF in BiH today presented the awards for the media contribution to the promotion and protection of children’s rights to Sadeta Bajrović, a journalist at the Center for Investigative Journalism.

“I was awarded for the story “Fighting bureaucrats for children’s lives”, which talks about the unequal rights when it comes to medical treatment of children in BiH who suffer from a rare and incurable chronic disease, cystic fibrosis,” said Bajrović.

During the research for the piece, she investigated the situation in BiH regarding the treatment of cystic fibrosis and determined that the rights of children depend on the place where they live and on those who decide whether their therapy will be covered by insurance or not.

“In recent years, six children have left the Una-Sana Canton to get a treatment they deserve outside the country. Among them is a boy Benjamin Semanić, about whom I wrote in a text that went to Germany at the beginning of this month. In neighboring countries, patients suffering from cystic fibrosis have managed for the latest drug ‘Caftrio’, which is great hope for a more functional life of these children, to be financed by the state, while in our country they are still fighting for basic drugs,” said Bajrović.

Also, on the occasion of World Children’s Day, UNICEF awarded other prizes today. Jasmin Ligata from Sarajevo, Željka Perišić Ninković from Banja Luka and Slavko Klisura from Goražde received the awards for individual contribution to the promotion of children’s rights.

Denis Bojić received special recognition from UNICEF for his contribution to the rights of children and persons with disabilities in the media for his film “Some New Broadway”.